Caleb Heimlich argues political leaders are showing ‘no leadership’ by ‘giving in’ and not condemning violence.

Seattle residents have reportedly taken issue with city officials’ lack of public response in the wake of violent unrest in the Washington city on inauguration night.

Just hours after President Biden took office, a group of about 100 people marched in the Emerald City, where police said windows were broken at a federal courthouse and officers arrested three people.

The crowd called for the abolition of Immigration and Customs Enforcement (ICE) and, outside the federal immigration court, several people set fire to an American flag, The Seattle Times reported.

The first Starbucks location was damaged during an anti-Biden protest in Seattle on Wednesday. (Seattle Police Department)

But instead of granting KOMO News an interview with Mayor Jenny Durkan as the news station had requested, a city spokesperson provided a statement, according to the report.

"Violent threats, vandalism, and misogynistic and homophobic hate speech are unacceptable in our community," the spokesperson’s statement said, in part. "Mayor Durkan has consistently denounced individuals who are targeting small businesses and government facilities."

Some City Council Members also opted to release statements instead of speaking out publicly about the unrest, or chose not to speak at all about the issue, according to the report. 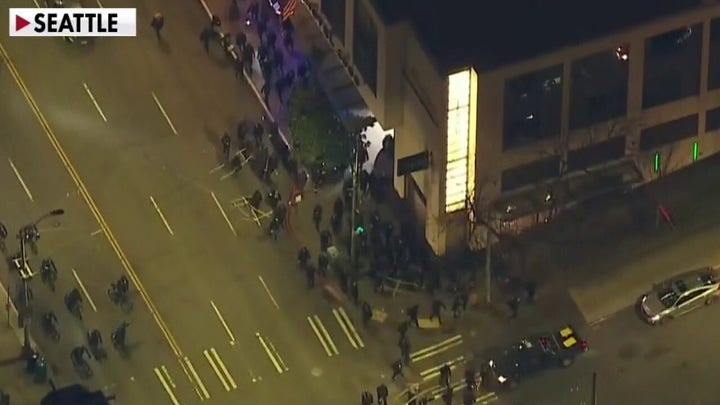 In response to the statement from Durkan’s office, Beach reportedly added: "We are not talking about all that other stuff … We are talking about these fools [who are] nightly destroying our city. That’s what we want to hear about."

A spokesperson for Nyland’s office did not immediately respond to Fox News’ request for comment.

Meanwhile, in Portland, a group of protesters carrying signs against President Biden and police also demonstrated Wednesday night, marching and damaging the headquarters of the Democratic Party of Oregon, police said.

PORTLAND RIOTING AGAINST BIDEN INAUGURATION LEADS TO CHARGES FOR 4, MORE LIKELY TO FOLLOW

Some in the group of about 150 people smashed windows and spray-painted anarchist symbols at the political party building, according to police.

Some demonstrators carried a sign reading, "We don’t want Biden, we want revenge!" in response to "police murders" and "imperialist wars." Others reportedly carried a banner declaring "We Are Ungovernable."

Police said the crowd swarmed the officers and threw objects at authorities, who used a smoke canister to get away. 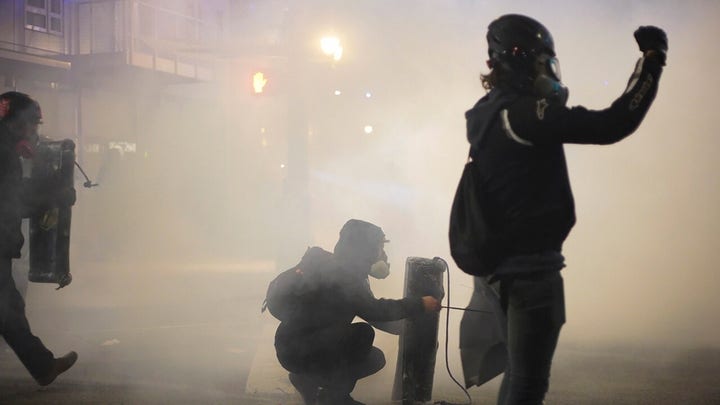 The group was one of several that gathered in the city on Inauguration Day, police said. A car caravan in the city celebrated the transition of presidential power and urged policy change, The Oregonian/OregonLive reported. Another group gathered around 5 p.m. in Northeast Portland with speakers talking about police brutality.

Portland has been the site of frequent protests, many involving violent clashes between officers and demonstrators, ever since the police-involved death of George Floyd in Minneapolis in May. Over the summer, there were demonstrations for more than 100 straight days.

Mayor Ted Wheeler has decried what he described as a segment of violent agitators who detract from the message of police accountability and should be subject to more severe punishment.