A choir teacher has been hailed for calmly rendering first aid to a student wounded in Thursday’s California school shooting amid the chaotic scene.

Eddie Mendoza, 17, one of the students huddled in Katie Holt’s barricaded classroom, said Holt was “literally a hero” for doing what she did, Reuters reported.

Holt took action when another student said that she’d been hit, Fox 11 Los Angeles reported. She also barricaded her classroom with a piano.

As Holt treated the girl's wound with a gunshot wound kit, the girl told her she had another bullet wound.

“I used what I could to dress her other wound and she was responsive, she was joking around a little bit. She was really strong,” Holt said, according to the station.

The girl was among five students shot at Saugus High School in Santa Clarita Thursday morning when a student on his 16th birthday opened fire with a .45 caliber handgun, police said. Two of the students were killed. 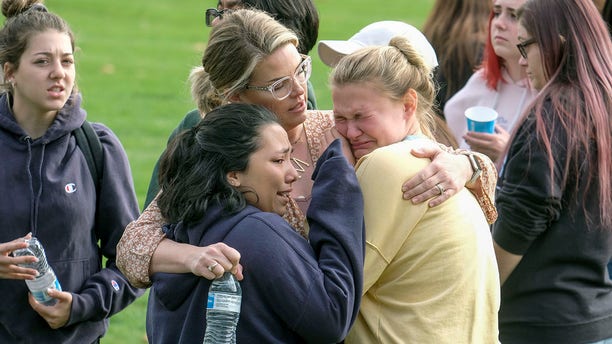 Students are comforted as they wait to be reunited with their parents following a shooting at Saugus High School that injured several people, Thursday, Nov. 14, 2019, in Santa Clarita, Calif. (AP)

One of those who was killed was identified Friday by the Los Angeles County Coroner's office as Gracie Anne Muehlberger, 15, KABC-TV reported.

The shooter shot himself in the head and was in grave condition, police said.

"It was just so hard hearing her say 'I want my mom,'” Eddie said of the wounded girl. “It was heartbreaking."

"Our teacher was very calm and collected," a student named Pamela said of Holt during an interview with Reuters.

Pamela said roughly 35 students were holed up with the teacher waiting for police to arrive. She said they all remained calm. Police reached them after about 30 minutes.

The girl said the ordeal left her feeling "numb" as she sought to console other classmates shaken by the events, according to Reuters.

"I just feel distant from it," she said.

"I'm sure it will hit you later," her father said, standing beside her as she was interviewed.