San Francisco parent on push to reopen schools: ‘Zoom in a room is a joke’

Students can start returning to school in person, but some teachers will remain home and Zoom into their classrooms; San Francisco mother Robin Herman reacts on ‘Fox &amp; Friends.’

A San Francisco mother of two blasted California’s new concept for students to return to the classroom, "Zoom in a Room." Parents can send their kids back to in-person learning next week with a laptop and headphones; but the twist is teachers will continue to work online from home. In addition, an adult monitor will watch the kids in class.

Robin Herman told "Fox & Friends" co-host Ainsley Earhardt Thursday, this idea is a "joke." It's very inconvenient for parents, for the kids," Herman said. "The only reason I'm sending my daughter to school is just from a socialization standpoint."

Herman’s comments come as coronavirus vaccines continue to roll out across the country, as teachers were among the first groups eligible for the doses.

Despite educators being fully vaccinated, the San Francisco mother told Earhardt her daughter’s teacher plans to stay home for the "rest of the school year." 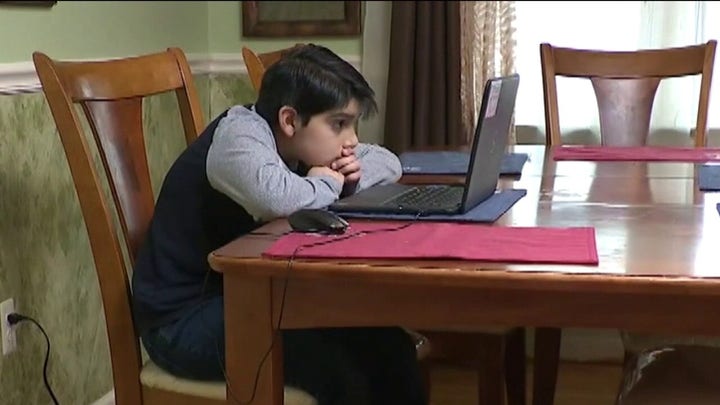 "Her excuse to the children were [sic] because her husband is not fully vaccinated," Herman mentioned. "Which I think is an absolutely ridiculous excuse."

More than a year after the coronavirus pandemic forced California’s classrooms to close, the most populated state is lagging in reopening schools in comparison to the rest of the country.

"I think these teachers are actually really comfortable now," she told Earhardt. "[They] can work from home…only got to teach 'til noon; then [they] have the rest of the day to [themselves]. They're getting a full salary as well, which is disgusting."

The San Francisco mother added she wished the teachers would try to get back into school with the kids because it’s "extremely important."

"These kids have never physically met the teacher," Herman said. "It's only been online, and from a social and emotional standpoint, it’d be great to close out the school year with getting these teachers back in the classroom."

Herman went on to say her daughter misses her friends and that it’d be "nice" to meet her teacher in person, as she’s on her last couple years in elementary school. The San Francisco mother mentioned she noticed changes in her daughter’s personality from learning at home for more than a year.

"…independent learning is not for everyone," she told Earhardt. "…it’s extremely important as they're developing and growing to have that guidance from a physical teacher."