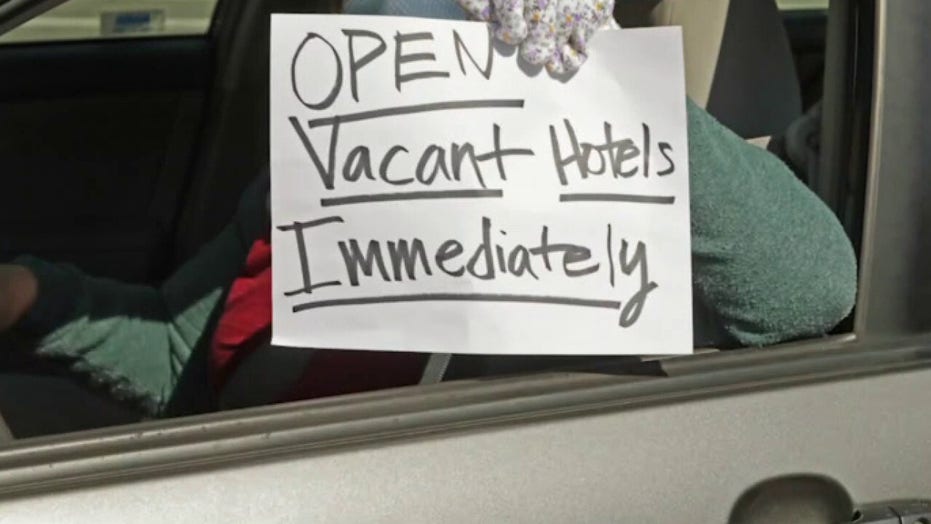 San Francisco has charged taxpayers $16.1 million to shelter more than 300 people experiencing homelessness in the city, according to reports.

The 262 tents used, which with services and food cost taxpayers about $61,000 apiece, are set up in six public lots called "Safe Sleeping Villages," where officials also offer food and other services such as bathrooms and 24-hour security to the city's homeless, the San Fransisco Chronicle reported Thursday.

"During normal times, two of the main ways we help people out of homelessness are shelter placements and homeward bound, where we connect people with a relative or friend willing to take them in. Because of COVID-19, both of these have been severely limited, tying our hands," Breed tweeted at the time.

She added that the city has added 1,000 new shelter beds since she took office in 2018 and that it has had to reduce shelter capacity by 76% because of the pandemic and social distancing requirements to help prevent the spread of the virus. While thousands of people experiencing homelessness have been set up in hotels, Breed expressed concerns about the "logistical challenges" of such an effort.

VIDEO SURFACES OF BEATING, ROBBERY OF ASIAN MAN IN SAN FRANCISCO AMID UPTICK IN ATTACKS

"We frankly do not have many other options right now," the mayor wrote. "Having places with resources serving people in the neighborhood is better than unsanctioned encampments."

The cost of one tent spot in one lot comes to $190 per night, about two-and-a-half times the median rent for a one-bedroom apartment in San Francisco. The cost of one tent is also, however, $82 less than the city's homeless hotel program, which costs taxpayers about $21 million per month.

OAKLAND HOMICIDES UP 400% SO FAR THIS YEAR

Unlike the hotel shelter, the tent program is not eligible for reimbursement because the tents are not considered group shelter, according to the Chronicle.

While $16.1 million that the city allocated for the Sleeping Safe Villages is a fraction of the $300 million it spends annually on programs to help the homeless, San Francisco is already facing a $650 million budget deficit over the next two years. And a 2018 ballot measure to increase could increase spending for the homeless by another $300 million, the Chronicle reported.

San Francisco's homeless population has risen every year since 2005, and the city counted more than 8,000 people experiencing homelessness in 2019. COVID-19 has likely exacerbated those numbers.

SAN FRANCISCO TO MOVE $120M FROM POLICE TO BLACK COMMUNITY

"We have to find a way to have exits from the streets. But we need them to be more cost-effective," Supervisor Rafael Mandelman, who introduced a bill last fall that would increase shelter options like Sleeping Safe Villages, told the outlet.

Abigail Stewart-Kahn, interim director of the homeless department, said during a Wednesday budget committee hearing that the department does not have time to conduct a more rigorous contract bidding process to save money but that they are conducting an analysis of the Sleeping Safe program.

The mayor asked in December 2020 that all departments slash their budgets by 7.5% in an effort to address the city's deficit and said San Francisco's top priorities are "managing the COVID-19 pandemic, supporting homelessness and mental health investments [and] helping small businesses" that have suffered as a result of the virus.

"Closing this deficit will not be easy, and it’s going to require tough choices and real tradeoffs. While this pandemic will continue to slow our recovery, I know we can do the hard work to get this City moving forward," Breed said in a Dec. 16 statement.