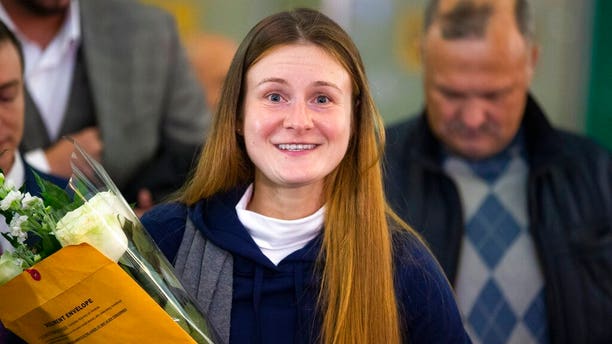 Russian agent Maria Butina smiles as she speaks to journalists upon her arrival from the United States at Moscow International Airport Sheremetyevo outside Moscow Moscow, Russia, Saturday, Oct. 26, 2019.  (AP)

Maria Butina, who was convicted in the United States after admitting to working as a Russian agent, arrived back in Moscow on Saturday after being released from a Florida prison on Friday, Russia's foreign ministry said.

U.S. Immigration and Customs Enforcement (ICE) officials took custody of Butina on Friday morning in order to facilitate her immediate deportation after she was released a facility in Tallahassee, Fla., where she served most of her 18-month sentence.

The 30-year-old Russia citizen pleaded guilty last December to conspiring to act as an unregistered agent for Russia. Under U.S. federal law, the Justice Department requires the registration of lobbyists and others in the U.S. who do the bidding of foreign governments.

Butina, a former graduate student at American University, admitted she and former Russian lawmaker Alexander Torshin worked to leverage contacts in the National Rifle Association (NRA) to gather information for the Kremlin about American conservative politics during the 2016 presidential election, when President Trump defeated Hillary Clinton.

Her lawyers said Friday that she was not a spy and that the case had nothing to do with espionage or election interference.

"As the government acknowledged, all of her activity in the United States was, in and of itself, legal but for her failure to file a notice with the Attorney General, an obligation prosecutors acknowledged she was unaware of," her attorneys, Robert Driscoll and Alfred Carry, said in a statement. "For violating this notice requirement, she pleaded guilty and was sentenced." 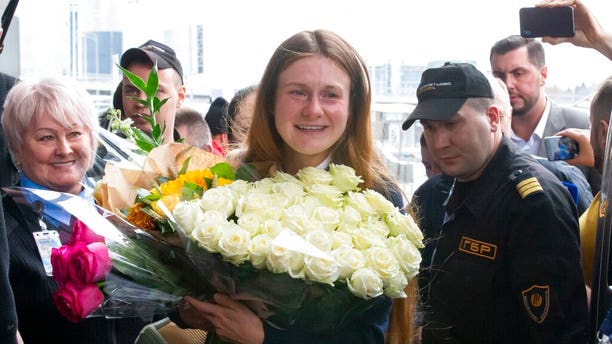 Russian agent Maria Butina, center, holds a bunch of flowers upon her arrival from the United States at Moscow International Airport Sheremetyevo outside Moscow. (AP)

Prosecutors last year claimed Butina used her contacts in the NRA and the National Prayer Breakfast to develop relationships with U.S. politicians to gather such insights. Butina has contended that she was not a spy and that her actions took place out in the open. Her lawyers have said that she was simply a student interested in American politics and better U.S.-Russian relations.

Her case captivated public attention because it unfolded around the same time as former Special Counsel Robert Mueller's Russia investigation, even though the two probes were entirely separate. It also led to scrutiny of the political dealings of the powerful NRA and underscored the variety of tools at Russia's disposal as it looks to gain a foothold in American institutions.

A report last month from Sen. Ron Wyden, an Oregon Democrat, alleged that the NRA acted as a "foreign asset" for Russia in the run-up to the election, and that NRA insiders provided access to the American political system to advance personal business interests. The report said the NRA had "engaged in a yearslong effort to facilitate the U.S.-based activities of Butina and Alexander Torshin, the former lawmaker.

The NRA called the report "politically motivated and contrived."

"I love both countries, and I was building peace," Butina said in an interview with NPR last spring. In the same interview, she said she knew that Torshin was providing the information she gathered to Russia's Ministry of Foreign Affairs. She said that she was honored to help and believed that her notes and analysis would be valuable to Russian officials.

Butina also said in the NPR interview that has no concerns about returning to Russia because people who know her "know as a matter of fact that I am not a spy nor do I have any secret information."

"I don't think I have any problems or I could have any concerns about my safety," she said. "I don't see that happening."