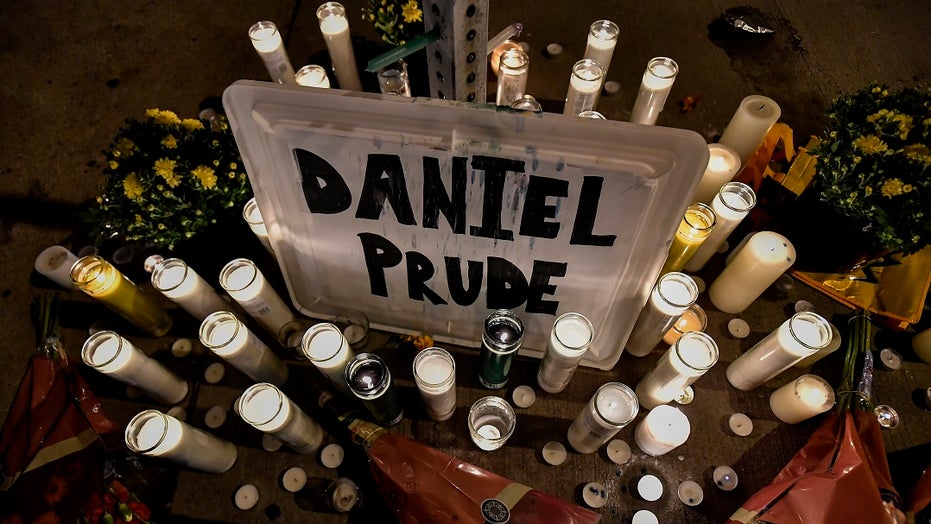 The mayor of Rochester, N.Y., announced the suspension of several police officers involved in the death of a Black man after a hood was placed over his head and his face was pressed onto the pavement for two minutes.

"I am suspending the officers in question today against counsel's advice, and I urge the attorney general to complete her investigation,” Mayor Lovely Warren said during a Thursday news conference. “I understand that the union may sue the city for this. They shall feel free to do so — I have been sued before.”

Messages and calls to the Rochester Police Department from Fox News were not returned.

Daniel Prude, 41, died of asphyxiation after a "spit hood" was put over his head while naked in the street during a March 23 encounter with police. He died seven days later after being taken off life-support.

POLICE SHOOT, KILL MAN IN DC AFTER RESPONDING TO REPORT OF GUNS IN CAR

Joe Prude, brother of Daniel Prude, right, and his son Armin, stand with a picture of Daniel Prude in Rochester, N.Y., on Thursday. (AP Photo/Ted Shaffrey)

Seven officers connected to the response will be suspended with pay, including officers Mark Vaughn, Troy Taladay and Fransisco Santiago, who are named in the police report.

Prude was visiting the city in western New York from Chicago when relatives called 911 to report he was experiencing mental health issues. He had taken off his clothes, but complied when responding officers asked him to put his hands behind his back.

According to police reports, officers put a "spit hood" over him -- which prevents saliva from getting on others -- due to concerns about coronavirus transmission. Prude asked that the hood be removed and an officer allegedly slammed his head into the street. Another officer, the report said, held Prude's head against the pavement for 2 minutes and ordered him to stop spitting.

USA Today reports that Rochester Police documents released by Prude's family show that his brother Joe had told police officers that Prude had run out of the house that night after he had been hospitalized earlier in the day for suicidal ideation. Warren also criticized the hospital for releasing him after a few hours.

The Monroe County Medical Examiner’s Office determined Prude's death a homicide by “complications of asphyxia in the setting of physical restraint." PCP was a contributing factor in Prude's death, the autopsy report said, according to The New York Times.

A makeshift memorial is seen, Wednesday in Rochester, N.Y., near the site where Daniel Prude was restrained by police officers. (AP Photo/Adrian Kraus)

She acknowledged that Prude would have been treated differently by officers if he was White.

"It's the way that the system works," she said. "Racism is alive and well in every system in America."

Warren said Police Chief La'Ron Singletary has been reprimanded for his actions in the months since the Prude's death for failing to inform her of the officers' actions. She said Singletary told her Prude died of a drug overdose while in police custody.

"Experiencing and ultimately dying from a drug overdose in police custody as I was told by the chief is entirely different than what I ultimately witnessed on the video," Warren said of the police body-camera footage that showed the encounter.

“I only learned of those officers' actions on Aug. 4 when cooperation council Tim Curtin reviewed the video for the FOIL [Freedom of Information Law] request by Prude’s family," Warren added. "At no time before Aug. 4 did Singletary or anyone make me aware of the officers’ actions in regard to Mr. Prude’s death.”

She also pushed for charges against all protesters be dropped as the nationwide debate over police practices continue.

Rochester police officers hold down Daniel Prude on March 23, 2020, in Rochester, N.Y. Prude, a Black man suffering from some type of mental disturbance in the streets of the western New York city, died of asphyxiation after a group of police officers put a hood over his head, then pressed his face into the pavement for two minutes, according to video and records released Wednesday by the man's family. (Rochester Police via Roth and Roth LLP via AP)<br>

In a statement, she encouraged the Rochester Police Department to launch an internal probe. Warren said James' office initially asked the city to stop its investigation, but reversed course Thursday.

"At this time, we have not asked the city of Rochester nor the Rochester Police Department to refrain from launching an internal investigation," James said in response. "In fact, we encourage both Rochester and the RPD to proceed with an internal review simultaneous to our investigation. The Prude family and the greater Rochester community deserve answers, and we will continue to work around the clock to provide them.”