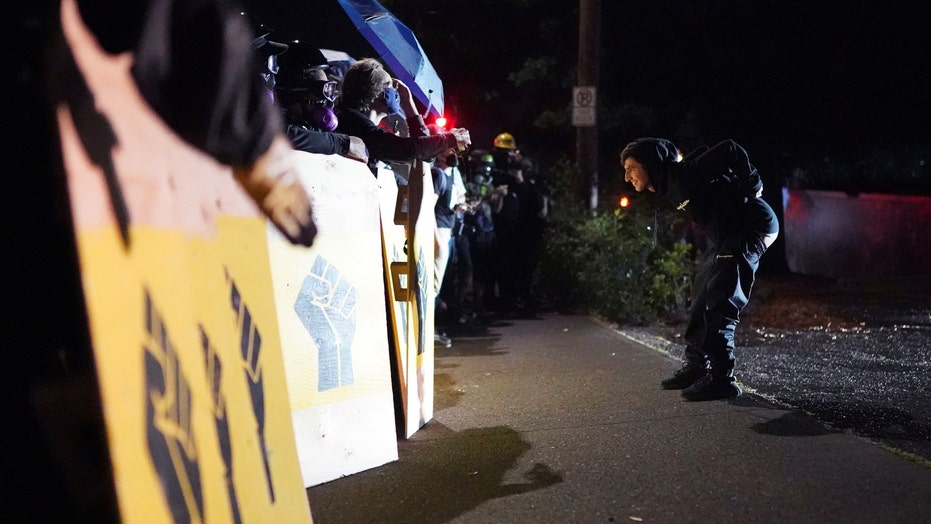 A riot was declared in Portland Sunday evening as officers tried to quell another night of unrest that saw protesters march on a police union building, throw objects at officers, block a road and set dumpster fires, according to multiple reports.

Roughly 200 people marched from Kenton Park to the Portland Police Association building just before 10 p.m., which was the site of another protest on Saturday.

When protesters arrived outside the building, police warned them not to participate in criminal activities.

BLACK PROTESTERS IN PORTLAND STRUGGLING TO HAVE THEIR VOICE HEARD

"To those gathering on North Lombard Street, you are at the PPA office. Do not engage in criminal activities such as vandalism or attempt to set the building on fire," police said. "These types of activities will not be permitted and will result in arrest and potential use of force such as riot control munitions and tear gas."

Demonstrators blocked off access to the road using dumpsters and fencing, according to The Oregonian. Flames were seen rising from dumpsters in the middle of the street

Police in riot gear then descended on the crowd, which retreated down North Denver Avenue before a riot was declared.

"The gathering on North Denver Ave near North Russet St is now being declared a riot. All persons in the area on North must disperse by traveling NORTH now. You are ordered to disperse immediately," police said.

Protesters would later move towards a local park before dozens returned to the police union building and authorities ordered those gathered to leave.

Officers would form a line around the building and several people were reportedly arrested throughout the night, the paper reported.

The protests entered their 74th night on Sunday since George Floyd's death in police custody in Minneapolis.

Three officers were hurt, including two who were taken to a hospital, during the efforts to clear the crowd of several hundred people outside the union building late Saturday. The two hospitalized officers have since been released. Nine people were arrested during the protest, police said in a statement.

The Portland Police Association building is located about five miles north of the federal courthouse.