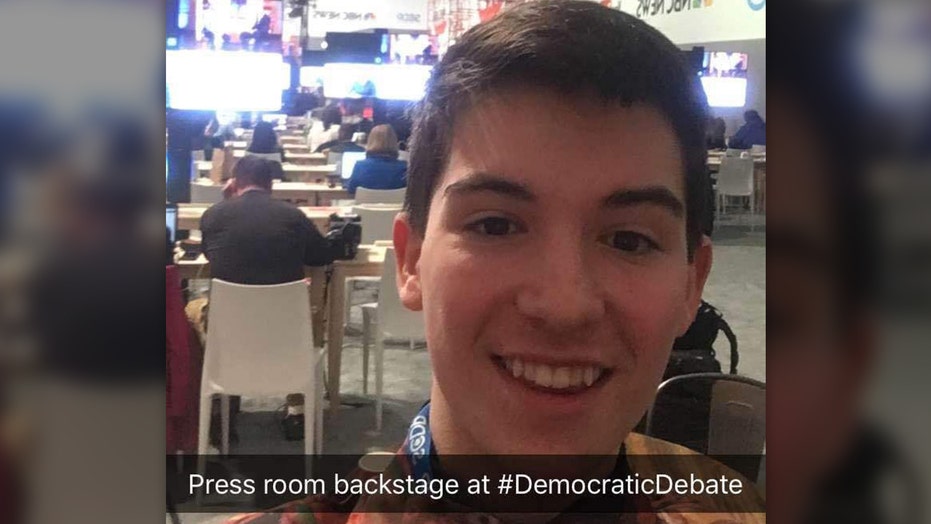 A self-described American nationalist from Massachusetts who was accused of leaving a hoax bomb inside a Tesla at a New York City mall shouted "the messiah is coming" as he was led out of a police precinct in handcuffs, according to video captured by a local news station.

Louis Shenker, the 22-year-old man arrested in connection with the Monday bomb hoax at a Queens, N.Y., mall, smiled and winked at the camera as he was being carted out in handcuffs on Tuesday from a Brooklyn police precinct, according to a video shared by CBS 2 New York.

Shenker, who has an Amherst, Mass., address, was charged with placing a false bomb/hazardous substance, criminal possession of stolen property and abandonment of a disabled animal, the New York Police Department said.

On Wednesday, the Queens District Attorney's office announced they added charge of making a terroristic threat. Shenker was ordered held without bail and faces up to seven years in prison if convicted.

Police sources told Fox News there was a chance Shenker would be charged federally in connection with the crimes. Investigators are still searching for a second suspect.

On Tuesday, when asked by reporters if there was anything he wanted to say, Shenker said, in part: "I have no fear … the messiah is coming," according to the video.

Police sources previously told Fox News that Shenker called 911 around 3 a.m. that day and turned himself in to authorities at a Brooklyn police precinct shortly thereafter.

NYPD Deputy Commissioner of Counterterrorism John Miller said Monday that police received a call shortly after 7:30 a.m. from the Queens Place Mall about a suspicious vehicle. The vehicle was reportedly left midway up a ramp within the garage and was parked in the center of the lane, which prevented other cars from getting by.

"They said there were propane tanks and wires protruding from the vehicle," he said. Police then taped off and evacuated the area with help from the Fire Department of New York as the city's bomb squad probed further.

"They were able to clear this vehicle and determine that it was not an explosive device although, based on their expertise, it appeared to be," Miller said. "The bomb squad has determined that this is a hoax device, which means in their judgment it was set up to appear to be a device."

Police later tweeted a photo showing the "hoax device," which appeared to have been made up of a roll of tape, wiring and an aerosol-type can, among other things. The picture shows the car was at least partially covered with cardboard or a tarp-like material. Police also discovered a husky-breed dog was inside the dark-colored Tesla with a Nevada license plate.

NYC MAN ARRESTED AFTER STRING OF ATTACKS ON WOMEN

The Tesla was reportedly stolen and had a Black Lives Matter-related sign inside. According to the Queens DA, all four doors and the vehicle's front and back hoods were left open. Shenker later told authorities the vehicle belonged to the other suspect, who left behind a California state ID, the office said.

Shenker claimed Tuesday that the suspicious device was actually a rig to charge the Tesla's dead battery. He mocked media coverage as "fake news" and derided reporters covering his arrest as "morons."

Shenker, who has described himself on social media as a "patriot" and a supporter of President Trump, was previously arrested Dec. 30 on suspicion of torching a poster attached to a police barricade in Manhattan, according to reports. He was arraigned Friday and released without bail.

Shenker has appeared on the online conspiracy show InfoWars and has filled his social media accounts with far-right views and buzzwords like "#MAGA" and "#StopTheSteal," noting his support of Trump's false claim that the 2020 presidential election was rigged, the Associated Press reported.

Shenker was expelled from the University of Massachusetts Amherst amid a controversy over his views, according to the report. His lawyers alleged that he was a victim of anti-White and anti-Jewish attacks and that faculty members conspired to file false hate crimes charges against him because his views did not align with theirs.

On a since-suspended Instagram account, Shenker allegedly mocked the practice of people including their pronouns by listing his as "American / Patriot," and has posted online attacks on Black Lives Matter, pushed conspiracy theories, and railed against the use of masks and lockdowns to combat the coronavirus pandemic.

Last month, a protest group accused Shenker of disrupting a Black Lives Matter vigil near Mayor Bill de Blasio's residence and turning it into a pro-Trump, anti-de Blasio "Chanukah Rave." A video posted to social media showed a man purported to be Shenker threatening to send the Proud Boys and Infowars host Alex Jones after a woman attending the vigil.