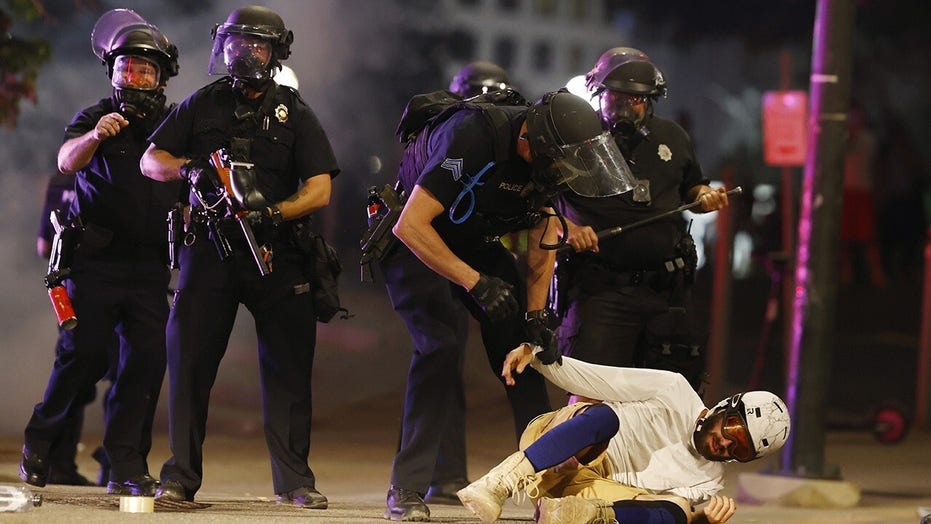 Police clash with George Floyd protesters in demonstrations across America

William La Jeunesse has an update on the protests beyond Minneapolis, Minnesota.

Police officers are not all holding the thin blue line in light of the George Floyd video footage, showing  an officer kneeling on the neck of a black man who died shortly after.

Following George Floyd’s death, many officers used social media to condemn the actions of the officers involved. A video shot by a bystander shows officers pinning Floyd to the ground for several minutes, during which he begs for air, then stops talking and moving.

“There no need to wait to see how ‘it plays out’. There is no need to put a knee on someone’s neck for NINE minutes. There IS a need to DO something. If you wear a badge and you don’t have an issue with this ... turn it in.”

Some of the posts call for the immediate arrest of the officers involved.

“I am deeply disturbed by the video of Mr. Floyd being murdered in the street with other officers there letting it go on,” Polk County, Ga., Sheriff Johnny Moats wrote on Facebook.

“I can assure everyone, me or any of my deputies will never treat anyone like that as long as I’m Sheriff. This kind of brutality is terrible and it needs to stop. All Officers involved need to be arrested and charged immediately. Praying for the family.”

“Not going hide behind ‘not being there,’” tweeted San Jose Police, Calif., Chief Eddie Garcia.

“I’d be one of the first to condemn anyone had I seen similar happen to one of my brother/ sister officers. What I saw happen to George Floyd disturbed me and is not consistent with the goal of our mission. The act of one, impacts us all.”

Some critics find the public statements, while commendable, to be of little value in the face of misconduct and brutality.

“Any minute progress is seen as miraculous because so little has been done for so long,” said Gloria Browne-Marshall, a civil rights attorney and professor at the John Jay College of Criminal Justice. “It’s nothing close to progress or what outrage would be taking place if it was a white man as the victim of this assault.”

She further said that she would not be a “cheerleader” for a “handful” of chiefs who decided to speak out.

“We’ve got to remember that it was not just officer Chauvin who was sitting on George Floyd’s neck,” she said.

Civil community leaders, including the Rev. Al Sharpton and the Rev. Jesse Jackson, have claimed that the officers used excessive force in the arrest, demanding that the men involved face murder charges.

“You don’t need anything more than you have now to arrest those folks,” Sharpton told reporters on Monday. “You have a deceased person. … You have a tape showing how he [became] deceased. … They should tell those four police what they tell all the people in the 'hood: ‘Tell it to the judge.’”