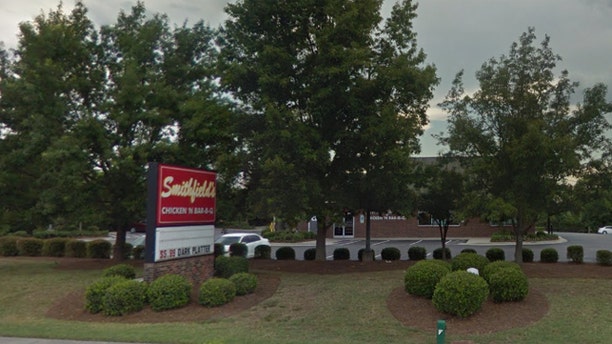 The workers at a restaurant who were accused of singing an anti-cop rap song in front of officers didn't sing it, a North Carolina police chief says. (Google Street View)

The workers at a restaurant who were accused of singing an anti-cop rap song in front of officers didn't sing it, a North Carolina police chief said Wednesday.

Raleigh Police Chief Cassandra Deck-Brown issued a statement saying neither the workers nor the manager at a Smithfield's Chicken 'N Bar-B-Q in Raleigh sang the N.W.A rap song "F--- tha Police" in front of officers as they ate on April 28. News outlets initially reported a post on the Raleigh Police Protective Association's Facebook page last Friday related the incident.

Deck-Brown said two officers did witness a worker make eye contact with them and then mouth the words. She said no other workers were involved, and no one else saw it. She said her department, the restaurant and the entire community "were victims of misinformation and misunderstanding."

Mark O'Mara, an attorney representing one of the restaurant's co-owners, told a news conference that the account that circulated on social media resulted from the offended officer telling a colleague, who then sent a Twitter feed that turned into an email blast and ultimately showed up on the association's Facebook page.

"There was no singing. There was no banging on anything and there were no other employees involved," O'Mara said. "Nobody else in the store, employees or customers, noticed or witnessed any of it."

Surveillance video from four different angles shows the officers initially waiting to place an order. The video, provided by O'Mara, showed customers walking through the dining room and workers in the kitchen and at the counter going about their respective tasks. None of the workers appears to be singing as was initially indicated on social media.

A second, 25-minute video shows the officers sitting in a corner of the dining room being served their meal as other patrons sat nearby. A social media post suggested the singing workers forced the officers to leave before they could finish eating.

According to O'Mara, the officers finished their meal and spoke with a manager about what they said they saw. Eventually, the officers reached the co-owner of the restaurant and, after a conversation between them and the worker, the manager apologized and the worker resigned. By then, word was already out and was being embellished, O'Mara said.

"They got it resolved that day, but it had already caught fire," O'Mara said.

Rick Armstrong, vice president of the Raleigh Police Protective Association, took issue with the chief's statement, specifically that while the obscenity may not have been sung, it was stated. Armstrong said the officers didn't want the incident to get out, but someone in the department spread the word.

People began calling for a boycott of Smithfield after word of the incident, but Armstrong said he would like to work with the restaurant manager to resolve the fallout.

"I'd like to reach out to the owner about the harm it's done to his business," Armstrong said. "We don't believe there should be a boycott. I would encourage my fellow officers to eat at Smithfield."