Bored Midwesterners are putting the polar vortex to the test this week, challenging whether or not the current temperature in their area is cold enough to instantly freeze a pot of boiling water.

Locals are heading outside in subzero temperatures to see how strong Mother Nature really is. After boiling hot water, a participant heads outside and throws the liquid in the air, watching it disperse into tiny "snowflakes" and create a plume of smoke.

While it can never be "too cold" to snow, the organization does note that heavy snowfalls typically occurs when there is warmer air close to the ground.

During the "Boiling Water Challenge," the hot water simply evaporates into vapor and thus "condenses into a cloud," according to WTOL. Though the cloud disappears within seconds, it's still a thrilling sight (if you do it right).

Officials also urge anyone who attempts the challenge to be cautious and wear protective winter gear.

"Be aware of which way the wind is blowing so you don’t end up with a faceful of either liquid or vapor," WTOL adds.

Many people have posted slow-motion videos and enhanced photos of the snow-like illusion. 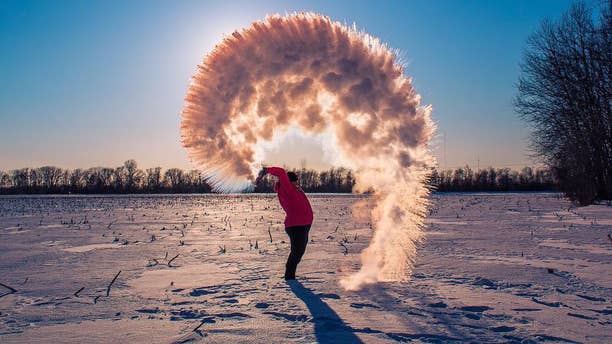 A photographer shares a stunning photo of the "Boiling Water Challenge" in Porage, Indiana. (Instagram/@jordanchambersphotography)

An Indiana photographer shared an epic photo on Instagram Wednesday of the vapor cloud created in minus 20 degrees. It garnered more than 575 likes as of Thursday afternoon. The color of the falling crystals was even more vibrant with the Sun in the background in Portage.

In Evanston, Illinois, a woman took to a snow-covered sidewalk to create "[her] own cloud." The Sun highlighted the bright white cloud with a crystal blue sky in the background. 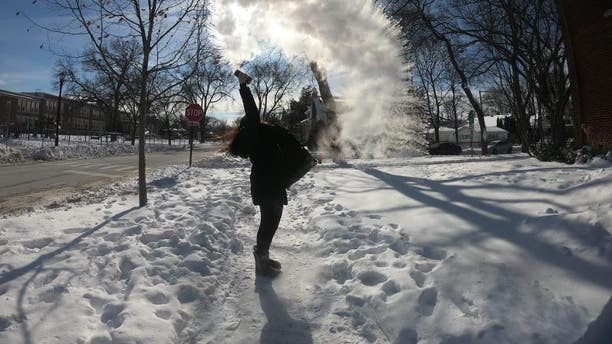 A woman participates in the "Boiling Water Challenge" in Evanston, Illinois. (Instagram/@jescapriscila)

Maggie Russo, a Chicago-based photographer, also took the opportunity to snap a stunning picture during the "Boiling Water Challenge." 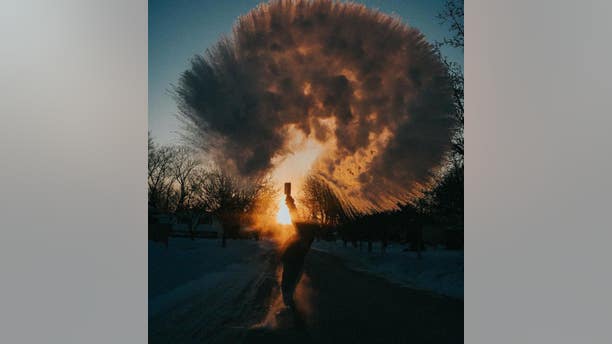 Maggie Russo, a Chicago-based photographer, shares a photo from the "Boiling Water Challenge" on Jan. 30, 2019. (Instagram/@maggierussophoto)

Chicago dropped to a low of around minus 23 on Wednesday, slightly above the city's lowest-ever reading of minus 27 from January 1985. Wind chills reportedly made it feel like minus 50 or worse.

A woman named Claire in Westwood, Michigan, said she also "did the thing."

From afar, the cloud of smoke hovering over her head almost looks like a large bubble. Eventually, the cloud disseminated. 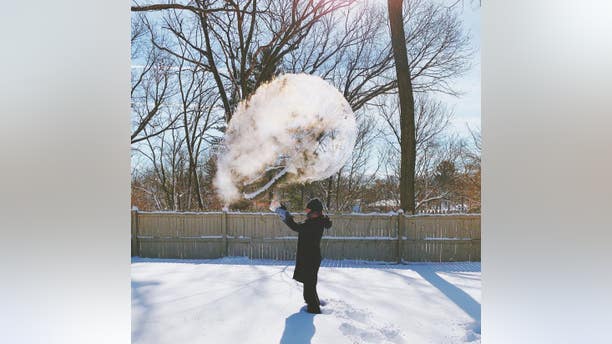 A cloud of "smoke" is seen in Westwood, Michigan, during the January 2019 polar vortex. (Instagram/@cvdoss)

A winter storm warning was in effect for the Wolverine State Wednesday as snow pummeled several towns and cities. A timelapse video taken in Kalamazoo Wednesday shows an impressive 15 inches of snow accumulating outside of a home within just 13 seconds.

Here's a look at some other videos and photos from "Boiling Water Challenge" participants.