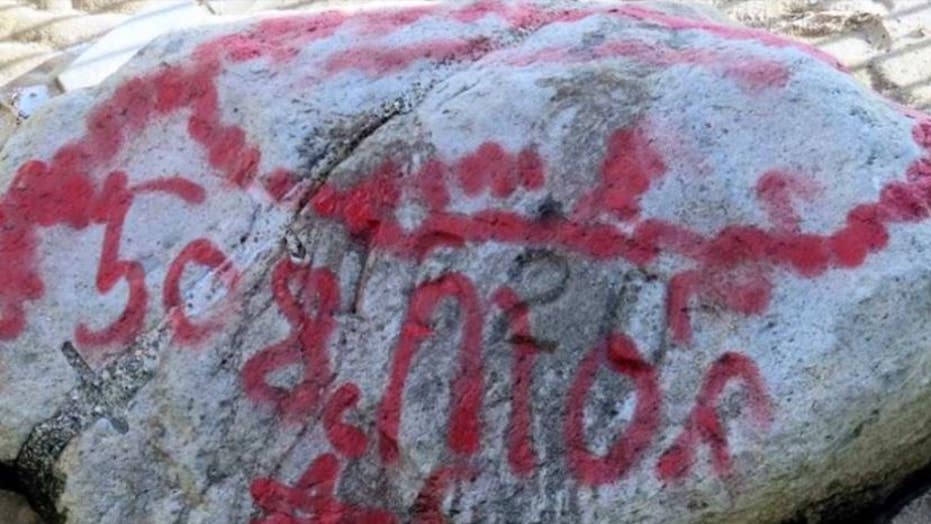 Plymouth Rock and other landmarks were found vandalized Monday in a disturbing discovery as the city of Plymouth, Mass., gears up to celebrate the 400th anniversary of the pilgrims' arrival to the new world on the Mayflower.

The famous rock at the site of their 1620 landing was found with its inscription covered with red graffiti.

Also vandalized: a sign celebrating the anniversary, the Pilgrim Maiden statue and the National Monument to the Forefathers, according to town officials. The graffiti included an obscene spray-painted message directed at police.

The iconic Plymouth Rock and other nearby landmarks were vandalized with red graffiti. ( Kevin Depathy/GoFundMe)

Also damaged were four artworks in the shape of scallops, the Plymouth Chamber of Commerce said.

"We are saddened and sickened by the recent vandalism in our historic town," she tweeted. "We will begin clean up as soon as possible and the police are investigating."

By Monday evening, cleanup was underway to restore the monuments. The forefather's monument had been cleaned along with the four scallop shells, town officials said in a Facebook post. The Pilgrim Maiden Statue was cleaned but crews said they wanted to return with a different chemical solution for further treatment.

"Seeing this type of disrespect for the historic reminders of the Mayflower story is both sad and unsettling," said Lea Filson, the executive director of the See Plymouth tourism group. "The outpouring of concern and anger over the incident has been a positive ending to a thoughtless gesture."

The celebration of the 400th anniversary is scheduled to begin in April.