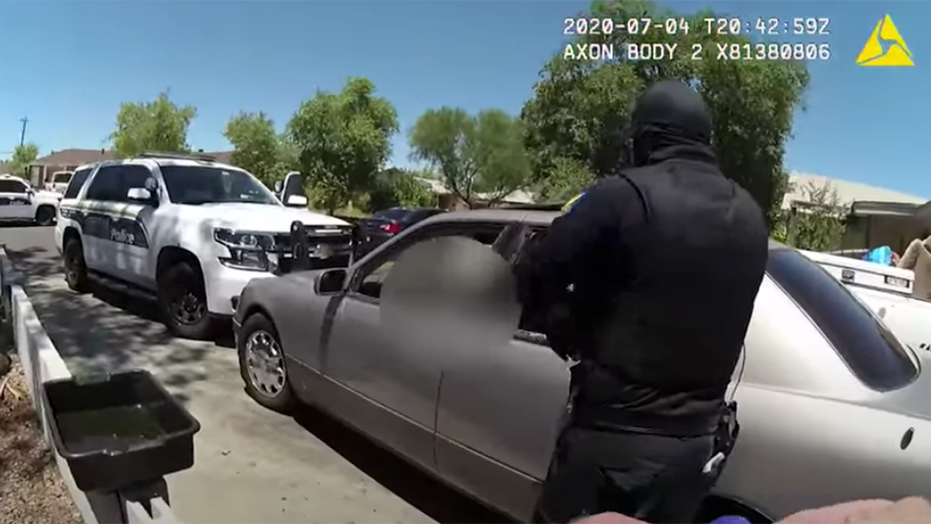 The footage belongs to an officer who was not involved in the shooting but arrived on the scene to assist in the aftermath, the department said.

"We want every single video. The family demands every video, the full 911 call, the dispatching, everything," Viri Hernandez of Poder in Action told the station.

The shooting took place as Garcia was sitting in a car in a driveway, according to police.

A cellphone video shot by a bystander that was posted on social media shows officers with guns drawn shouting at Garcia, threatening to shoot him.

Screengrab from bodycam footage from a police-involved shooting on July 4. (Phoenix Police Department )

It captures the officer arriving on the scene after Garcia was shot. He is heard saying to other officers, “Where’s the gun?”

The video then shows the officer putting on surgical gloves, moving toward Garcia and pulling a handgun out of the vehicle.

In the YouTube video, Sgt. Mercedes Fortune said the officer’s bodycam footage was being released in response to misinformation about the facts of the case on social media.

Fortune said police went to the scene in response to a 911 call from a stabbing victim.

Bodycam footage shows an officer putting on surgical gloves, moving towards Garcia, and pulling a handgun out of the vehicle. (Phoenix Police Department)

She said Garcia refused orders to get out of the car, rolled up the windows, and pulled out a gun.

"The man repeatedly told [the] officer to shoot him and lifted the gun towards officers," she said. "That's when two officers fired their weapons."

“Releasing body-worn camera footage from the officers directly involved before all witness and officer interviews are completed could compromise the investigation," she said.

Steven Merry, a friend of Garcia, told Fox 10 he saw the shooting unfold.

"They put the gun on his head like this and they're still telling him not to move, to get his hand off a gun he (didn't) have and then they shot him again. They made sure he was dead," Merry said, according to the station.

Officers had initially responded to the scene after a report of an aggravated assault case.