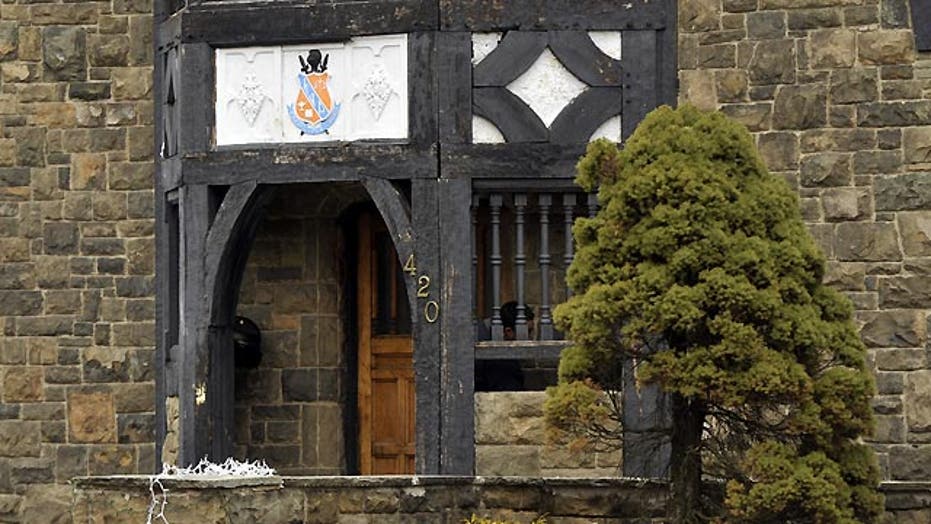 Claims of secret pics of women

Penn State said Tuesday that it intends to hold accountable the fraternity members who used a private, invitation-only Facebook page to post "appalling, offensive" photos of nude and partly nude women, some apparently asleep or passed out.

Kappa Delta Rho was suspended for a year Tuesday after police began investigating the allegations.

A former member at the university's flagship campus in State College tipped police off to the page, telling them in January that it had been used by members to share photos of "unsuspecting victims, drug sales and hazing," according to a copy of a police warrant obtained by The Associated Press.

The ex-member also provided authorities with printouts from the page.

A Penn State administrator called the allegations a violation of the standards and values required for recognized student organizations.

"The evidence offered by the Facebook postings is appalling, offensive and inconsistent" with the university's expectations, Damon Sims, Penn State's vice president for student affairs, said in a news release.

"Some of the postings were of nude females that appeared to be passed out and nude or in other sexual or embarrassing positions," a detective wrote.

Sims said the school would find those responsible and hold them accountable.

The fraternity's national executive director, Joe Rosenberg, told the Penn State chapter in a letter that it would be banned from most activities for the near future and must reorganize.

Chapter officials, who can appeal the decision, did not respond to messages seeking comment. A young man who answered the door Tuesday afternoon declined to identify himself and said the fraternity had no comment.

Police said anyone who posted the photos could face misdemeanor charges of harassment or invasion of privacy, with a fine being the most likely penalty.

According to the warrant, the fraternity's page had 144 active members that included both students and alumni.

State College police said they first fielded the complaint on Jan. 18 and reported the matter to university administrators on March 3.

Facebook was contacted to disable the site and to obtain more information for the investigation, Robb said.

Some of the postings involved nude women in "sexual or embarrassing positions," the warrant reads. "It appears from the photos provided that the individuals in the photos are not aware that the photos had been taken."

According to the ex-fraternity member who went to police, a second page dubbed "2.0" was started in about April 2014 after a woman depicted on the first Facebook page, called "Covert Business Transactions," complained.

The informant said the woman was visiting the fraternity when a member accidentally left his Facebook page logged in, and she noticed a topless photograph of her had been posted to the group.

Robb told the AP she wanted the photo removed but did not wish to press charges.

"A lot of that is probably what we're going to end up with, people who don't want anything done, just these photos removed," Robb said. "That's already done."

The investigation was first reported by WJAC-TV in Johnstown.

Penn State's director of student conduct, Danny Shaha, told reporters that students are still living in the fraternity house. He said the house is privately owned, giving the university little control over it.

The photographs accompanying the warrant included images of fully nude and partly clothed women and a scene of a man appearing to grope a woman, her pants partly pulled down.

Police said some of the copies of the warrant sent to news outlets included images of the victims, and authorities asked that those images not be released. They said the photos were sent in error.

The informant who visited the police station provided police with brief explanations for individual photos. One, he said, showed a woman vomiting in a member's room. Another showed "the type of stuff that happens at KDR." Two other images showed strippers hired by the fraternity for a party.

Some of the posts included with the warrant were images of cellphone text exchanges, including one from a woman apparently concerned about a casual sexual encounter the night before and whether birth control was used.