Otto Warmbier: American student freed by North Korea back on US soil

A plane carrying Otto Warmbier, the U.S. college student arrested, tried and imprisoned in North Korea for more than a year, and who is now in a coma, landed in his hometown of Cincinnati Tuesday night and he was rushed to a hospital for urgent medical treatment. 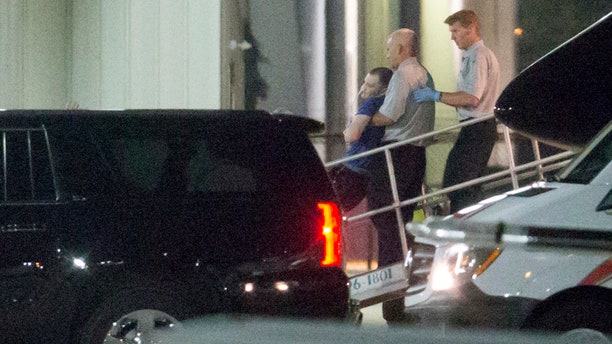 Otto Warmbier, a 22-year-old college student detained and imprisoned in North Korea, is carried off of an airplane at Lunken Airport in Cincinnati on Tuesday, June 13, 2017. (Sam Greene/The Cincinnati Enquirer via AP)

A U.S. official confirmed to Fox News that Warmbier, 22, was in a coma and had been for "over a year." The official added that the North Koreans told the U.S. that Warmbier contracted botulism before slipping into a coma. However, the two U.S. doctors traveling with him have not been able to confirm that claim, the official said.

The New York Times, citing an unnamed senior American official, said the U.S. had received intelligence reports in recent weeks that Warmbier had been repeatedly beaten.

Neighbor Tom Purdy described him to Fox News as "a great kid - truly outstanding... an athlete, a National Merit scholar and prom king. He is awesome."

"We're very concerned for his health and future. We hope he can return to normal. We've been praying for him every night."

Blue and white ribbons lined the street near the family home.

A group of students playing tennis outside Wyoming High School, which Warmbier attended, said he is known in the community as "an outstanding student" and a "wonderful guy". While happy he's home, one student said he was "heartbroken to learn he's in a coma."

His medical evacuation followed a brief flurry of diplomatic activity that involved the highest level of the State Department.

"At the direction of the president, the Department of State has secured the release of Otto Warmbier from North Korea," Secretary of State Rex Tillerson said. "Mr. Warmbier is en route to the United States, where he will be reunited with his family. The Department of State continues to have discussions with the DPRK regarding three other U.S. citizens reported detained. Out of respect for the privacy of Mr. Warmbier and his family, we have no further comment on Mr. Warmbier." 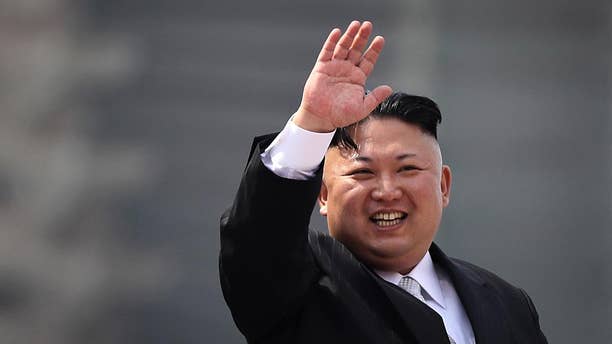 Kim Jong Un has ratcheted up tensions with the west in recent months. (Associated Press)

Warmbier's parents, who have appeared on Fox News Channel in the past to plead for their son's release, expressed somber gratitude.

“Our son is coming home,” Fred Warmbier told The Washington Post Tuesday morning, after his son had been evacuated from North Korea. “At the moment, we’re just treating this like he’s been in an accident. We get to see our son Otto tonight.”

Top U.S. officials were quick to express revulsion at North Korea’s reported abuse of the student.

“Otto’s detainment and sentence was unnecessary and appalling, and North Korea should be universally condemned for its abhorrent behavior,” Sen. Rob Portman, R-Ohio, said in a statement. “Otto should have been released from the start. For North Korea to imprison Otto with no notification or consular access for more than a year is the utmost example of its complete failure to recognize fundamental human rights and dignity.”

“Otto has been in a coma for over a year now and urgently needs proper medical care in the United States,” former New Mexico Gov. Bill Richardson, who worked for Warmbier's release with his Center for Global Engagement, said in a statement obtained by Fox News. “We received a call from Cindy and Fred Warmbier early today to update us on Otto’s condition. In no uncertain terms North Korea must explain the causes of his coma.”

AMERICANS RELEASED FROM NORTH KOREAN CAPTIVITY BACK ON US SOIL

The U.S. has no diplomatic relations in North Korea. 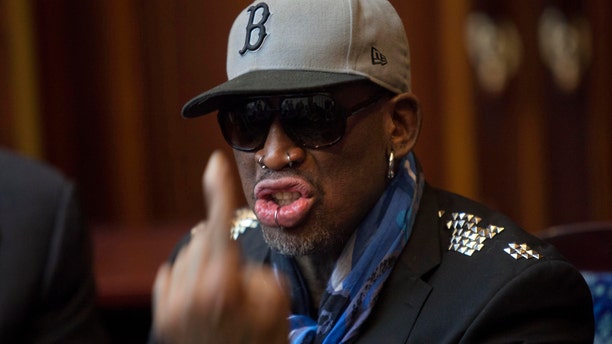 Meantime, former NBA star Dennis Rodman, a self-described friend of Kim Jong Un, recently landed in North Korea on a non-U.S.-sanctioned mission he said was aimed at promoting sports in the isolated nation.