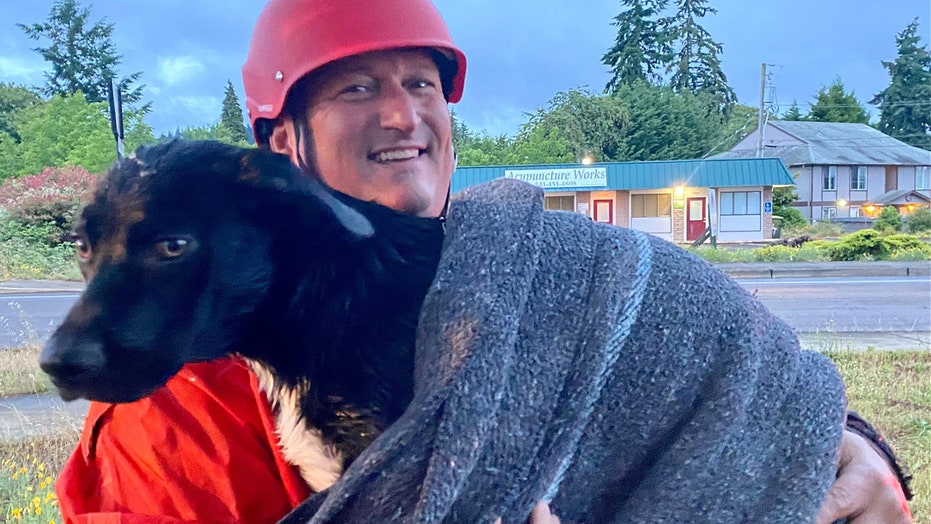 A dog in Oregon has been reunited with its owners after firefighters rescued the injured pup from a canal on Sunday.

Firefighters with the Lebanon Fire District jumped into action after two citizens alerted police to a dog that appeared stranded on a piling support of a railroad trestle in the canal, fire officials wrote on Facebook.

Officials observed the dog had an injured front leg and determined a water rescue was necessary. Firefighters donned protective dry suits, flotation devices, and helmets before entering the water.

Lt. Michael Maynard and engineer Corey Knipstein made their way across the canal to the location of the dog, who officials described as "cold and wet, but friendly."

The pair secured the dog, a 45-pound black mixed-breed, and carried it to shore. Fire officials posted a series of photos showing the rescue.

Police scanned the dog for a microchip but did not find one. The dog was then transported to a medical center for pets for an evaluation.

After posting about the rescue on social media in the hopes of locating the dog’s owners, fire officials posted an update Monday saying the vet alerted them that the dog and its owners have been reunited.

"It sounds like they may have seen this post on social media, so a big thank you to all of our community members who shared this post and helped reunite this dog with his family!" fire officials said.