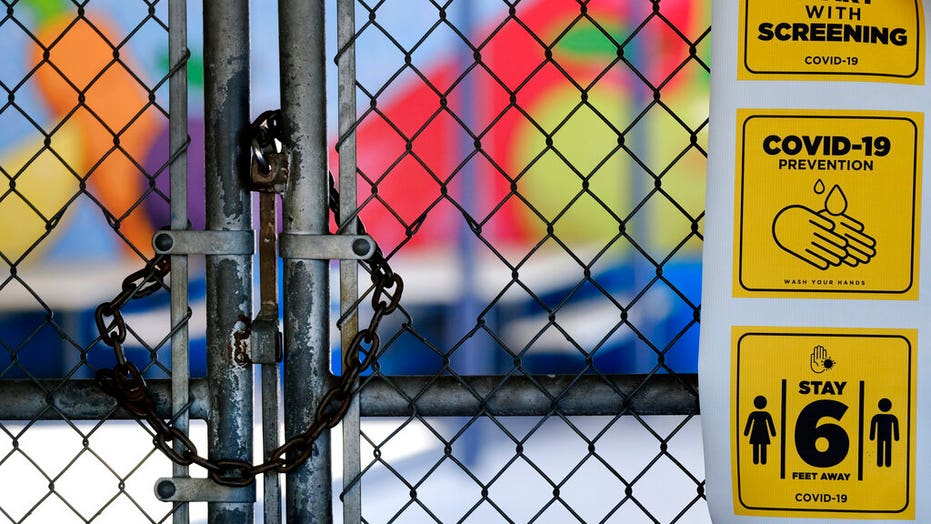 A recent survey of Southern California school districts showed that students from low-income families have struggled the most with online learning during the coronavirus pandemic, according to a Thursday report.

The survey, conducted by the Los Angeles Times, reviewed 45 school districts in the region. It revealed a sharp digital divide between high-income and low-income communities in their ability to adjust to online learning after schools closed their campuses.

A gate is locked at the closed Ranchito Elementary School in the San Fernando Valley section of Los Angeles.  (AP)

Districts from more affluent communities, like the Las Viergenes Unified School District, for instance, were able to make the transition with relative ease. After shutting down on a Friday, the school was running virtually, conducting lessons online, less than a week later, the Times reported.

But districts from poorer communities – where Blacks and Latinos make up a large proportion of students – struggled to make that transition. In Coachella Valley Unified School District, many students did not have a computer or Internet access.

Many are worried that these disparities in public education will result in long-lasting harm to a generation of children.

“The longer this goes on, the longer the pendulum swings to where this could be a generation that’s really left behind,” said Beth Tarasawa, of the not-for-profit educational research group NWEA, to the Times.

Some districts tried to close the digital divide by providing computers and Internet hotspots to families. But the rollout was far from smooth.

At Lynwood Unified, a low-income district, officials had ordered computers for nearly all of its 13,000 students, but many failed to arrive on schedule, causing many students to fall behind in their lessons, according to the Times survey. The county’s education office likewise could not find Internet hotspots for sale.

At a recent panel on school reopening, UCLA education professor Tyrone Howard said the pandemic has “pulled back the covers on the gross inequities that exist in our society."

“While they’re not new,” Howard said, “I think in this really difficult moment, it has made the realities around inequities, even more front and center in all of our everyday lives.