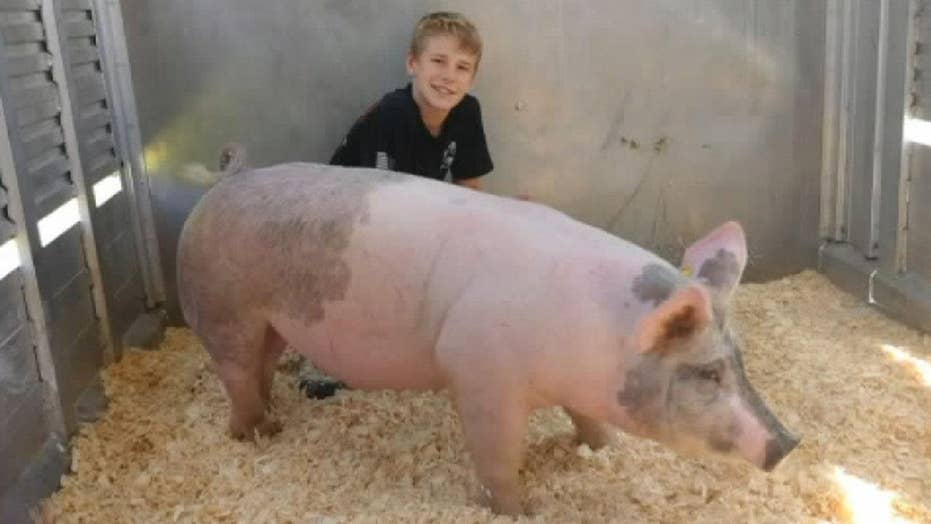 14-year-old boy raises more than $11,000 when he auctioned his 230-pound hog at Ohio County fair; donations were made to St. Jude Children’s Research Hospital.

An Ohio town is praising a young boy after he decided to donate the money he made from auctioning off his 230-pound hog over the weekend to the St. Jude Children’s Research Hospital.

Austin Lettner, 14, and his younger brother told their parents they wanted to donate any profits they made off the sale of their pigs at the 2019 Medina County Fair on Sunday to people who needed the money more than they did.

"One day my parents just asked me, well asked me and [my brother], Logan, if we wanted to keep the money for our pigs or donate it, and we said donate the money," Austin told Ohio’s FOX8. “The people that we are donating the money to, they need the money more than we do. No kid should have cancer."

The initial bidders came in high at $12 a pound, bringing in a total of almost $3,000 but the auctioneer informed the eager crowd they were going to open up the bidding to anyone who wanted to donate an additional dollar per pound that would go directly to charity.

Austin’s dad said he was shocked when he saw dozens of hands go up.

“It was a sea of cards that just came up," Jamie Lettner told FOX8. “They are not farmers. They run gravel pits, they run shoe stores and to have them come out and put that money back into their community, it's a beautiful thing."

Stacey Lettner, Austin's mom, told the local station that her boys' selflessness made her a proud parent.

"It's just so heartwarming and it makes you feel good as a parent that my children chose to donate some of their money, instead of keeping it for themselves," she said. "They could have done a lot with that money, but instead they chose to help kids and families who need it more than they do.”