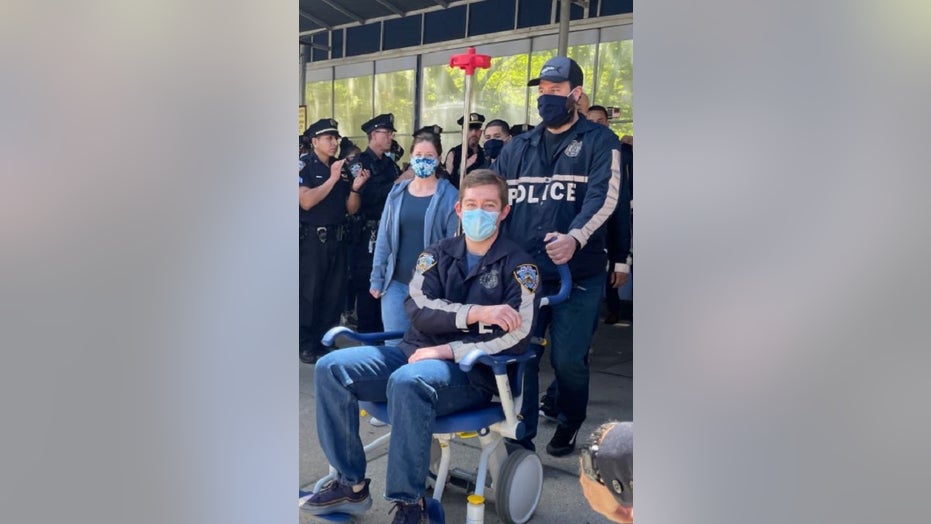 The head of the union that represents New York City police officers assailed local leaders Thursday for "holding back our police" moments after an officer was released from a hospital to a hero's welcome after being shot three times the night before.

Pat Lynch, president of the Police Benevolent Association, told reporters that anti-police policies have emboldened criminals amid a violent crime surge across the city.

"Yes there's guns on our streets but the bigger problem is they're holding back out police," Lynch added. "If they're shooting New York City police officers, what chance does the general public have?"

The remarks came following McGurran's release from the hospital. He was brought out in a wheelchair and was met by dozens of his fellow officers who gave him an ovation as he stood up and walked to a car waiting to take him home.

The 28-year-old was shot by a gun-wielding man who was involved in a fatal shooting moments earlier, authorities said. He returned fire and the suspected gunman, identified as Boyce Hayward, was shot and eventually taken into custody.

McGurran, a four-year veteran of the police force, was struck in his bullet-proof vest as well as his rear and leg in Brooklyn's Bedford-Stuyvesant neighborhood.  The shooting has been part of a gruesome uptick in violent crime.

The solution to the city's crime woes, Lynch said, is for elected leaders to reverse laws that make it difficult for officers to do their jobs and policies that put criminals back on the street. Cops don't feel safe on the street and are questioned when they take action, he said.

He said the city can't afford the decade-long arc it would take to reduce crime to previous levels.

"We don’t have 10 years if we're living in our neighborhoods...let’s make the decision now to admit they made a mistake and fix that mistake so we can bring the city back," he said.