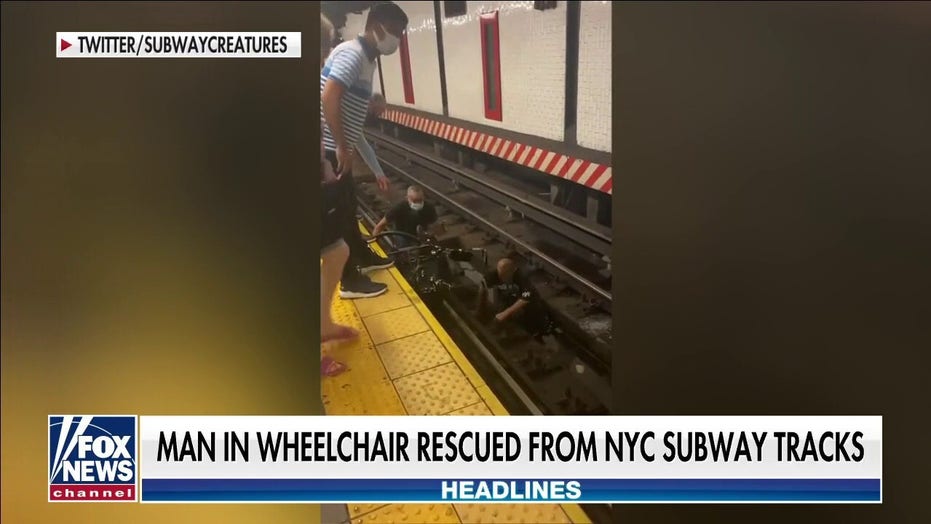 Witnesses say a bystander jumped on the tracks and helped pull the man to safety moments before train arrived at station.

Dramatic video has emerged of a Good Samaritan rescuing a man in a wheelchair who had fallen down onto the tracks at a New York City subway station, seconds before the train passes through.

The footage captured Wednesday in the Big Apple’s bustling Union Square station shows an unidentified man jumping down to pull the man and his wheelchair off the tracks as the rumbling sound of an approaching train could be heard.

"There is a Downtown local 6 train to Brooklyn Bridge/City Hall approaching the station. Please stand away from the platform edge," a voice from a loudspeaker says as the Good Samaritan lifts the man back to safety.

The video then pans right, showing the lights of a subway train heading toward the scene where the rescue just unfolded.

Police told CBS New York that the man in the wheelchair was taken to a local hospital with non-life threatening injuries.

Lauren Mennen, a reporter with the station who witnessed the rescue, said the Good Samaritan "didn’t think twice whether he was going to go on those tracks."

"I was like, people need this. There’s heroes in action and I was like I’m going to wave my hand at the train and it will all be good," she added. "I hope people just take positivity away from all this."