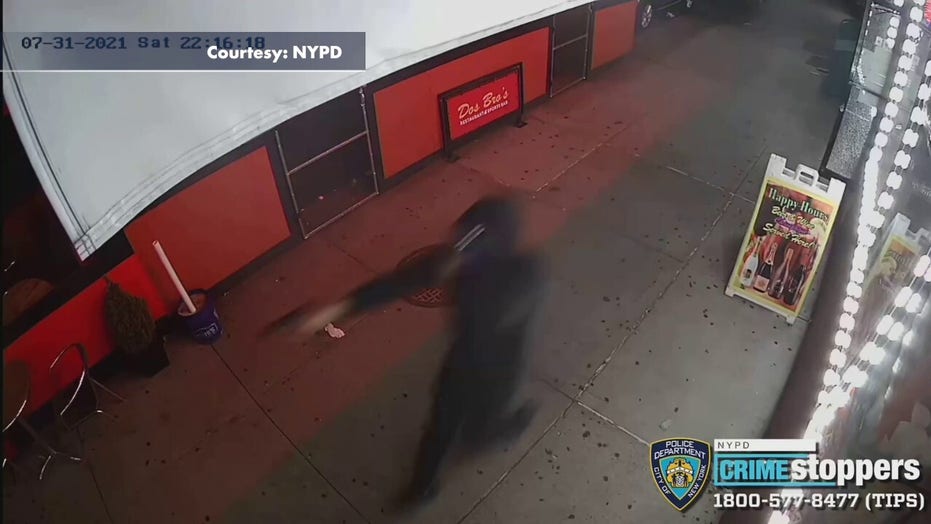 NYPD releases video of what it called a 'brazen, coordinated attack' in the borough of Queens on Saturday night

Two masked and hooded men walked up to a crowd near a laundromat and barbershop in the New York City borough of Queens and opened fire, wounding 10 people, including three known gang members, before escaping on mopeds, police said Sunday morning.

The shooting unfolded in the Queen’s neighborhood of Corona just before 11 p.m. Saturday. Police said 40 shell casings have so far been recovered from the scene near 99th Street and 37th Avenue.

"This was a brazen, coordinated attack, for lack of a better word," NYPD Chief of Detectives James Essig said during a news conference. "This is unacceptable, and it has to stop."

In a separate news conference on Sunday, Democratic mayoral candidate Eric Adams referred to the incident as a "mass shooting."

NYPD officials released surveillance video of the two unknown males approaching the group on foot. Both men brandished firearms and began firing at people standing in front of the barbershop. Two other unknown males on mopeds followed behind the shooters and picked them both up before fleeing.

Police said that bystanders were walking along the sidewalk and that a party was in progress at a restaurant a few doors down from the barbershop at the time of the shooting.

Eight males and two females between the ages of 19 and 72 years old were all hospitalized with non-life-threatening injuries, police said. The most seriously injured suffered a gunshot wound to the stomach.

Essig said that seven of the victims were innocent bystanders, while the three others were known members of the Trinitario street gang – believed to be the intended targets.

Two other men in masks and hoods picked up the two shooters after they opened fire and fled the scene. (NYPD)

"There's just one common theme, I want to get out there, that's a recurring theme that keeps happening, and it has to stop throughout the city," Essig said. "That's gang members; that's guns, multiple guns on the scene, scooters being used, masks; and lastly, unintended targets getting hit. This is unacceptable on our streets in New York City, and it has to stop."

"Trust me when I tell you, if you allow gangs to get footholds in this city, we have a real problem," Adams said. "This is a crisis."

No one was in custody as of Sunday morning.

Authorities asked anyone with information about the shooting or the suspects to contact police through @NYPDTips, or call them at 800-577-TIPS.