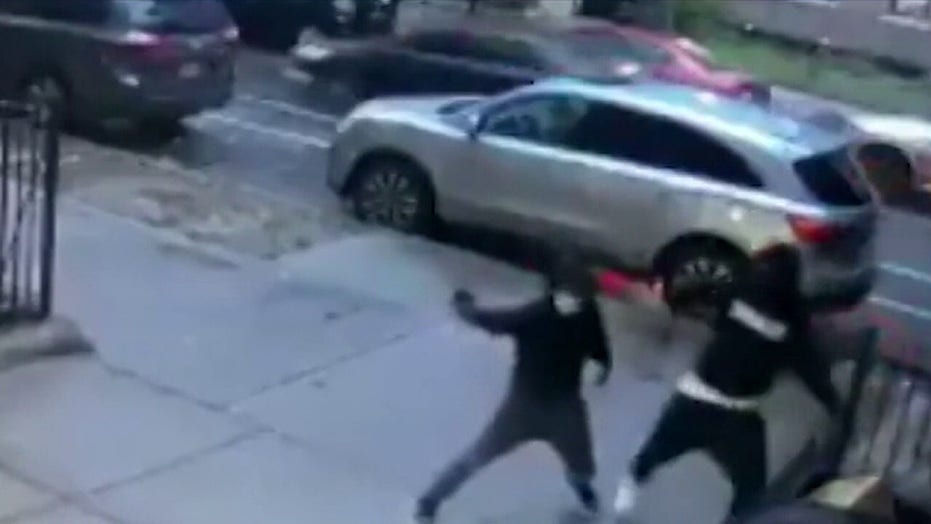 A one-year-old boy was killed and at least 35 people injured in more than two dozen separate shootings in New York City; Aishah Hasnie reports on the latest.

As New York City confronts an alarming surge in gun violence, the NYPD on Monday reported 28 shootings over the weekend, including one in Brooklyn caught on video that left a man wounded.

Thirty-five people were shot as a result of those shootings, which took place between Friday and Sunday -- a sharp rise over the same period last year when only five shootings with six victims were reported.

This weekend's shootings left a 1-year-old baby boy dead, the only homicide. The child was shot during a cookout. The shooting also wounded three male adults.

Though there were far fewer shootings last year, they were deadlier with five deaths.

During the same period last year, there were 22 shootings and 30 victims, according to the station.

“Do you know these guys?” the NYPD tweeted Sunday.

The video shows two gunmen, one wearing a coronavirus mask, firing at least six shots toward the entrance of an apartment building on Bergen Street.

“The suspects fired multiple rounds at the 28-year-old male victim, striking him in the forearm,” the NYPD said.

On Monday, the New York Post reported that 15 people were shot in New York City from midday Saturday to midday Sunday.

One of the victims was a 21-year-old man who was sitting in a car when he was shot in the head early Sunday in Sheepshead Bay, Brooklyn, the paper reported. He was fighting for his life.

A Sheepshead Bay woman named Lucy told the paper she heard shots and then heard screaming.

“The next thing I knew the street was flooded with police lights and ambulance lights,” she said.

NYPD Commissioner Dermot Shea has blamed bail reform and coronavirus prisoner releases for the alarming rise in gun crime, which has led to increased criticism of Mayor Bill de Blasio, the paper reported.

But a Post analysis of department data found that most people released under the criminal justice reforms or amid the pandemic had no known ties to the bloodshed.

The paper quoted criminal justice experts as saying cops should focus on the flow of illegal guns into the city instead of playing the “blame game."