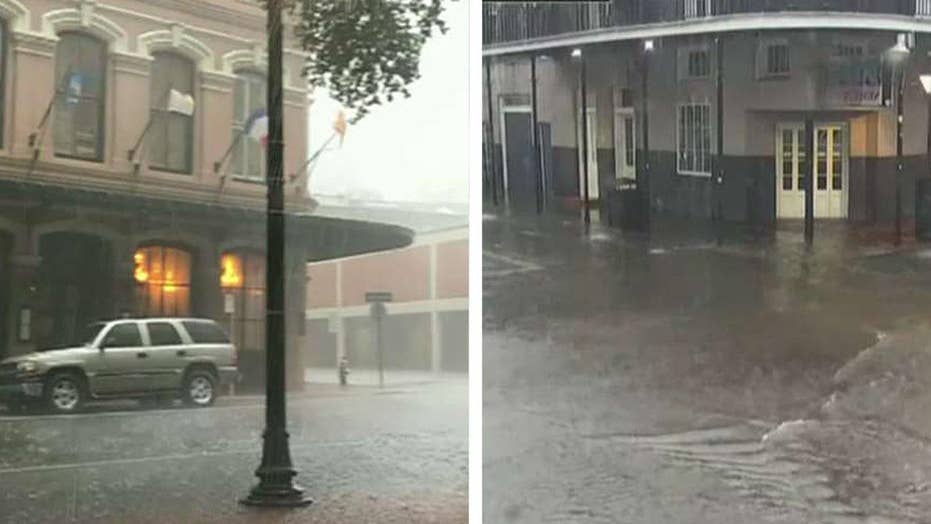 Severe thunderstorms in Louisiana flood streets as a tornado is recorded near the University of New Orleans campus.

A brewing tropical weather system in the Gulf of Mexico is bringing widespread flash flooding across New Orleans on Wednesday, as forecasters warn the storm could strengthen to a hurricane by the weekend and push the already swollen Mississippi River precariously close to the tops of levees that protect the city.

The National Hurricane Center said a low-pressure area over the water south of the Florida Panhandle is forecast to strengthen into Tropical Storm Barry by Thursday night, the second named storm of the 2019 Atlantic Hurricane Season.

The potential forecast track of Barry, which is forecast to be a tropical storm by Thursday night and hurricane by Friday. (National Hurricane Center)

2019 ATLANTIC HURRICANE SEASON TO BE 'NEAR-NORMAL' WITH 9 TO 15 NAMED STORMS, NOAA SAYS

As of 11 a.m. Wednesday, the system is located 170 miles east-southeast of the mouth of the Mississippi River, moving west-southwest at 8 mph with 30 mph winds. A Tropical Storm Watch has been issued from the mouth of the Mississippi River to Morgan City, La. Air Force Reserve Unit reconnaissance aircraft is scheduled to investigate the disturbance Wednesday afternoon.

Barry is expected to form into a tropical storm by Thursday night. (Fox News)

"Interests elsewhere along the U.S. Gulf Coast from the Upper Texas Coast to the Florida Panhandle should monitor the progress of this system," the NHC said. "Additional Tropical Storm or Hurricane watches could be issued later today or tonight west of Morgan City."

Barry is forecast to strengthen in the next 72 hours to be a hurricane by Friday. A storm surge watch was issued from Peal River to Morgan City, La., where forecasters said 3 to 5 feet of surge-related flooding could occur.

Besides potential storm surge and high winds, the system is also expected to bring very heavy rainfall from the Upper Texas Coast to the Florida Panhandle, adding more water to the already swollen Mississippi River and bring it precariously close to the tops of levees that protect New Orleans.

Forecasters said that parts of Louisiana could see up to 12 inches of rain by Monday, with heavier amounts possible in some spots. Mississippi and Texas were also at risk of torrential rains.

The NWS said New Orleans is protected to a river level of 20 feet, but it was forecast to rise above flood stage to 19 feet by Friday. Though much of the heaviest rain isn't expected until the weekend, the broad area of disturbed weather in the Gulf was already producing strong thunderstorms and possible tornadoes over Louisiana on Wednesday.

Those storms prompted tornado and flash flood warnings Wednesday morning in the New Orleans area, with several people reporting waterspouts. The weather service said up to 3 inches of rain had fallen in the area.

New Orleans officials said that flash flooding forced the temporary closure of all libraries, and city hall was closed.

"'Non-essential' employees should stay home, essential should remain where they are until conditions improve," city officials said.

"4 to 6 inches have already fallen and 2 - 3 more is anticipated," the NWS said. "Please do not drive in flooded roads! Seek higher ground if flooding!"

Forecasters from the National Oceanic and Atmospheric Administration are calling for nine to 15 named storms with winds of 39 mph or higher, of which four to eight could strengthen into hurricanes. Of those storms, there will be two to four major hurricanes, which are classified as Category 3, 4 and 5 with winds of 111 mph or higher.