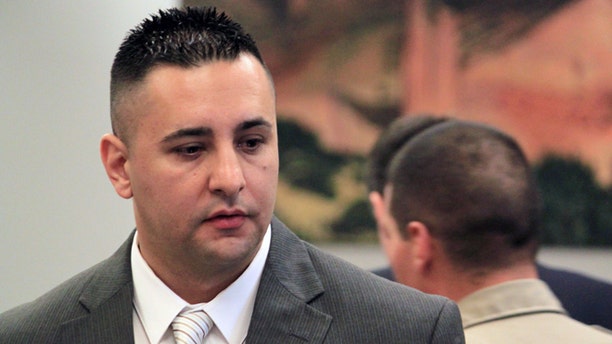 It's a murder trial involving nearly a half-dozen mistresses, a botched investigation at a troubled police department and a missing pickup truck at the heart of the case.

After a month of testimony, the trial of a former Albuquerque police officer accused of killing his wife with his service weapon has become a tale of workplace romances and steamy affairs, including a love triangle at the hair salon where the victim worked. In all, four mistresses and a woman who married defendant Levi Chavez just after his wife's death have testified about their trysts with him. Several of the women were police officers.

The case also has threatened to further tarnish the reputation of the beleaguered Albuquerque Police Department, which already is under investigation by the U.S. Justice Department over a series of police shootings. The trial included allegations that officers at the scene removed and even flushed key evidence down the toilet.

Chavez, 32, is accused of shooting his 26-year-old wife, Tera Chavez, with his department-issued gun in 2007 at their Los Lunas home and then trying to make her death look like a suicide.

Prosecutors have depicted Chavez as a philanderer whose marriage was crumbling, and say he killed his wife after she found out that he had staged the theft of his pickup truck valued at more than $20,000 to collect the insurance proceeds.

The defense says the death was a suicide by a woman unraveling over her failed marriage and relationships. Chavez's lawyer says he could not have killed his wife in October 2007 because he was with another woman at the time.

Tera Chavez was also having an affair with an Albuquerque police officer who was married to the maid of honor in her wedding, witnesses said. They had sex in the back of a hair salon where she worked, according to testimony.

"This trial is like a mosquito in a nudist colony," said Tom Garrity, owner of the Albuquerque-based public relations firm The Garrity Group. "Where do you begin?"

The case is nearing the end as defense attorney David Serna calls final witnesses this week.

Serna, who has long represented clients in high-profile New Mexico homicide cases, was able to convince the judge to bar statements Tera Chavez made about her husband and his "cop buddies" staging the theft of Levi Chavez's 2004 Ford F-250 truck as part of an insurance scam.

Now Serna is working to show how his client was a victim of a larger effort to paint him as a monster.

"There has been a persistent anti-Levi Chavez campaign by the media from the beginning," Serna told The Associated Press.

A key to Serna's defense strategy has been to discredit former Valencia County Sheriff's Detective Aaron Jones, one of the first investigators on the scene who concluded that the death "looked staged." Serna has portrayed Jones as a conspiracy theorist unable to hold steady law enforcement jobs in California and New Mexico as he kept stumbling upon "nefarious activities" involving crooked police that were never borne out.

Jones was taken off the investigation into Tera Chavez's death after calling his supervisors derogatory names.

He was also in the middle of one of the trial's more colorful moments when he testified that he believed Chavez was pretending to cry over his wife's death during interviews, which he saw as a clue Chavez might have been involved.

"If there is no snot, believe him not," he testified in a comment that drew immediate comparisons to attorney Johnnie Cochran's theatrics during the O.J. Simpson trial.

But Chavez and his lawyer suffered an apparent setback last week when a crime scene expert testifying in his defense failed to pull off a demonstration of how the officer's wife might have been able to kill herself with his gun.

There was a bullet in the gun's chamber when it was found next to Tera Chavez's body, leading prosecutors to argue that she could not have shot herself and then released the magazine.

Larry McCann, the expert, suggested that Tera Chavez held the gun upside down and used her thumb to pull the trigger. But McCann tried a few times to show jurors that he could pull the trigger and press the gun's magazine release in one continuous motion, but it didn't work.

The investigation also has been criticized since an Albuquerque officer, on scene to help Levi Chavez cope with his wife's death, cut out a piece of a bloody mattress and had the piece destroyed. Another officer used a toilet and flushed it before investigators had a chance to examine what may have been blood floating inside.

In other testimony, a digital forensic investigator with the Los Lunas Police Department told the jury that an Internet search from November 2006 on "how to kill someone" was found on Levi Chavez's computer.

The testimony from Levi Chavez's former mistresses included other bizarre details. One mistress provided an alibi, and another, who was called to counter the alibi, said that while she was carrying on the affair, she got her hair done by Tera Chavez at a Los Lunas salon. Another mistress said she and Levi Chavez had sex in a house he once shared with his wife just a few weeks after the wife was found dead.

"I think people are more focus on all the drama that the positions of both sides arguing their cases," Garrity said. "Jurors will have a hard time not to be caught up in that drama."