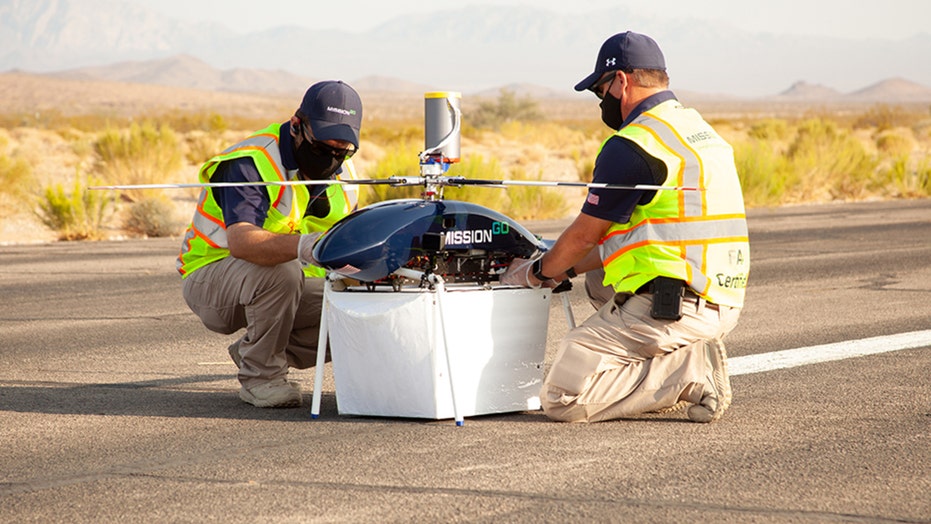 Drones could be the future in delivering organs to transplant patients

The pandemic has highlighted the need for alternative methods of travel when it comes to delivering vital organs.

LAS VEGAS – At 18 months old, Chris Rodriguez was diagnosed with heart failure and required a transplant.

“My heart was pumping too much blood and my organs couldn't deal with it,” said Rodriguez, now 14. “Most of my life, I’ve just been in and out of the hospital. Every day, I'm thankful for having a second chance at life.”

More than 100,000 people are on the national transplant waiting list, and approximately 17 people die each day waiting to receive an organ transplant, according to the Health Resources and Services Administration.

COVID-19 has complicated the situation even more, as travel restrictions and fewer commercial flights have made it difficult to transplant organs and highlighted the need for alternative travel methods to deliver vital organs.

“As a result of the COVID-19 pandemic, we have been subjected to fewer commercial flights to be able to transport organs for transplantation,” Joe Ferreira, Nevada Donor Network CEO said. “We've had to look at alternative ways to transport these organs and tissues by sending them via the roadways and even private charter flights, which can be very expensive and time-consuming and labor-intensive.”

That alternative method is drones.

“Right now, we're in the test phase and we've just embarked on that test phase to determine how feasible it is to do this on a wider scale,” Ferreira said.

The Nevada Donor Network partnered with MissionGo, a company that operates and innovates in the unmanned aircraft industry, to test the use of drones to deliver vital organs.

So far, they have completed two tests including delivering corneas that were intended for transplantation to a regional hospital in Nevada and flying a research kidney 10.3 miles, which is the longest organ delivery flight via unmanned aircraft.

“The concept: 'Is it safer or not?' is what our job is to prove to the general public and to the Federal Aviation Association, as well as to, most importantly, the critical donor family because we're all being entrusted with an amazing gift,” MissionGo CEO Scott Plank said.

Nevada is testing drones to deliver vital organs to transplant patients as the pandemic highlights the need for alternative travel methods. (MissionGo)

In April of 2019, an organ was successfully delivered for transplant to a patient with kidney failure for the first time ever by drone at the University of Maryland Medical Center.

Drones could offer an alternative to the high cost of chartering flights and reduce the risk associated with airport delays and traffic tie-ups on the road that threatens the viability of the organ.

“Depending on the organ that you're talking about for transplantation, a few hours can mean the difference between an organ being viable for transplantation and not,” Ferreira said. “That's why we've decided to employ this technology to eliminate those unnecessary delays, which we think will ultimately lead to better outcomes and fewer organs lost because of complications and delays in transit.”

Testing is still in the early stages, and while the results are promising there are still challenges and restrictions with the FAA.

“The safety case is obvious. It's faster, no carbon footprint compared to something like a helicopter which weighs two tons and has 600 pounds of aviation fuel over your head compared to a zero-carbon footprint,” Plank said, noting that the “onus is on the private industry like MissionGo to be one of the leaders in working with the FAA, working with critical use cases like medical, to be able to work with the general public and explain this is a very safe, over time method of transportation. “

With two successful flights under their belt, Ferreira and MissionGo hope to test further distances to study the organ viability during longer travel times.

“Ultimately we'd like to prove this technology effective to be able to transport organs, tissues, and eyes to other states in our region,” Ferreira said, adding that he believes drones will be the “primary mode of transportation at some point in the future.”

“We're obviously in the very initial stages of testing this technology, but we see the vision of being able to rely on this very safe, effective and reliable mode of transport to avert loss and improving the efficiency of these gifts that we're in charged to get to the recipient centers,” he said.

And Rodriguez agrees, seeing the technology as a potential “game-changer” when it comes to helping save lives.

“It really could be a game-changer because see like they're on the death bed. Boom. Just like that a drone coming in. Boom. They have a second chance and it really could come in handy,” Rodriguez said.

However, there is no clear timetable for when drones can start transporting organs and delivering these life-saving gifts in real-time, as hundreds of more tests need to be done to prove it as a safe alternative.

“I think it all depends on how quickly we can get those other test flights done and publish the results so that everybody's comfortable that this is a viable alternative to what's currently utilized to transport these gifts,” Ferreira said.