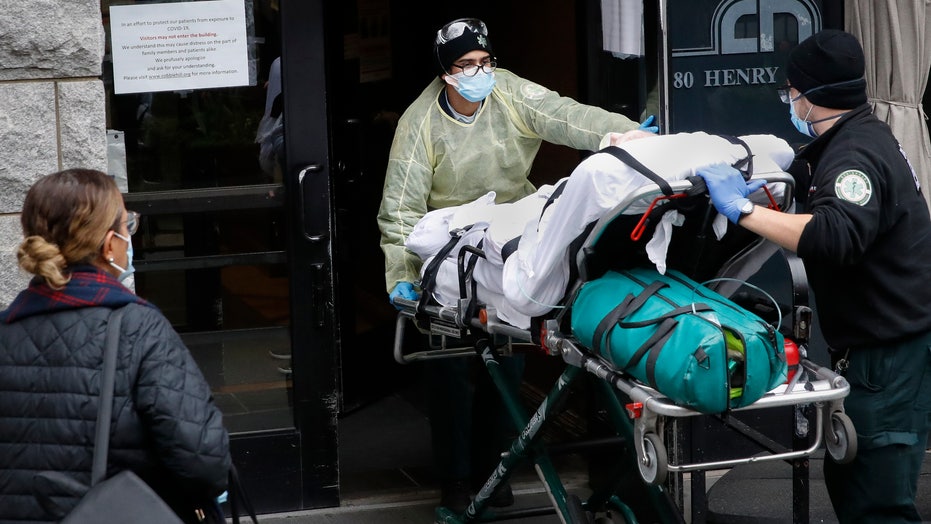 Nearly 26,000 nursing home residents have died and more than 60,000 were infected as the coronavirus tore through U.S. facilities within recent months, according to a government report on Monday.

The partial numbers released by the Centers for Medicare and Medicaid Services and the Centers for Disease Control and Prevention found the virus also infected 34,000 staff and killed more than 400. The numbers only included about 80 percent of the country's 15,400 nursing homes in the report meaning they are likely to rise going forward.

“This data, and anecdotal reports across the country, clearly show that nursing homes have been devastated by the virus,” wrote Medicare and Medicaid Administrator Seema Verma and CDC Director Robert Redfield.

A patient is wheeled into Cobble Hill Health Center by emergency medical workers in the Brooklyn borough of New York on April 17, 2020. A letter from the Centers for Medicare and Medicaid Services and the Centers for Disease Control and Prevention reports more than 60,000 cases of coronavirus illness among nursing home residents. (AP Photo/John Minchillo, File)

Verma said 1 out of every 4 facilities had at least one COVID-19 case, and 1 in 5 reported at least one death from the virus. It particularly impacted nursing homes that were rated lower on the government's 5-star rating system. Data by CMS showed that in Washington D.C., New Jersey, Connecticut, and Massachusetts -- more than 1 in 10 nursing home residents died, according to the Washington Post.

Verma told reporters that hand-washing for some nursing homes in the U.S. continues to be a challenge.

She said there was also a disparity in homes inspected during the coronavirus pandemic. The agency added states that fail to complete inspections could result in reduced COVID-19 relief funding.

The administrator of the Centers for Medicare and Medicaid Services Seema Verma speaks at an event on protecting seniors with diabetes in the Rose Garden White House in Washington on May 26, 2020.  (AP Photo/Evan Vucci, File)

Widespread testing would greatly assist the spread of the virus within nursing homes, although money remains a factor in reaching that point, according to the nursing home industry. They added that with staff numbering more than one million people, providing testing for all of them would remain difficult without proper funding.

The cost of a well-designed national testing program could reach into the billions of dollars, according to Mark Parkinson, the head of the nursing home association.

“It’s very important in the next stimulus bill not to just order testing,” said Parkinson.

Although the first wave of the pandemic may be easing in much of the country, that doesn’t mean nursing homes are in any less danger. Experts say in a virus rebound they can again become the stage for tragic scenes of death and despair, as well as a risk for the broader community.

“What is going on in a nursing home can be a barometer for where the virus is,” said Tamara Konetzka, a research professor at the University of Chicago, who specializes in long-term care issues. “You’ve got to be watching out and expecting a lot of cases in that community as well.”

The federal data doesn't include assisted living facilities, which some states count in their coronavirus totals. About 12,500 of the roughly 15,400 nursing homes had reported as of May 24.

“This is not a nursing home problem; this is a health system problem,” said Terry Fulmer, president of the John A. Hartford Foundation, which works to improve care for older adults. “Every system produces the outcome it is set up for. If you set up a system where the sickest and frailest people are in locations that are forgotten about and ignored, where the staff is paid less, why should that surprise anyone?"