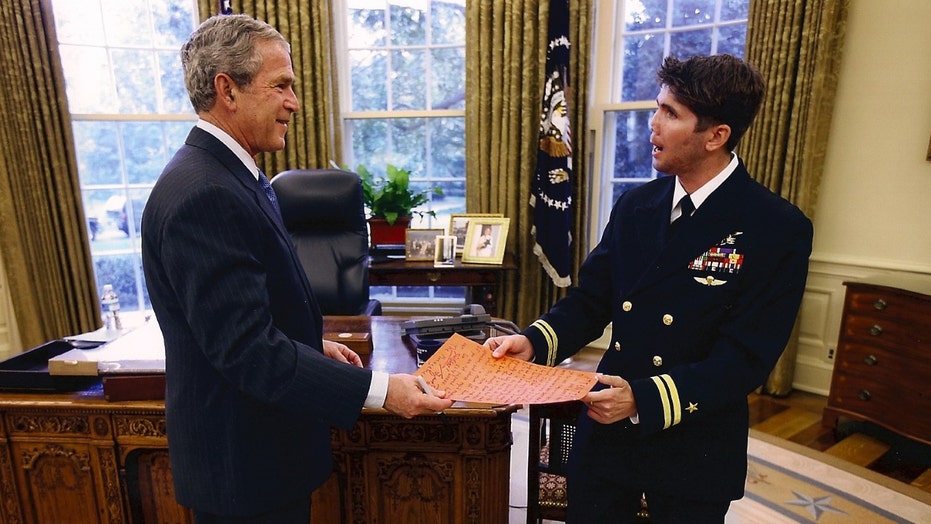 Former Navy SEAL and Army Ranger Jason Redman's motto is "Lead always and overcome all." Those words became a way of life for the soldier-turned-author after he battled back from 37 surgeries and years of recovery to become one of America's most inspirational figures.

Redman joined the Navy in 1992 and spent 11 years as an enlisted SEAL. He was commissioned in 2004 as a SEAL officer, and in 2006, he graduated from U.S. Army Ranger School before deploying to Fallujah, Iraq.

In 2007, while commanding a mission to capture a high-value Al Qaeda target, Redman and his team came under heavy machine-gun fire, severely wounding him in the left arm and face.

The Purple Heart recipient required dozens of operations and skin grafts to survive but managed to find meaning within his intense suffering. During his recovery, he placed a sign on his hospital door that read:

"Attention to all who enter here. If you are coming into this room with sorrow or to feel sorry for my wounds, go elsewhere. The wounds I received I got in a job I love, doing it for people I love, supporting the freedom of a country I deeply love. I am incredibly tough and will make a full recovery. What is full? That is the absolute utmost physically my body has the ability to recover. Then I will push that about 20 percent further through sheer mental tenacity. This room you are about to enter is a room of fun, optimism and intense rapid regrowth. If you are not prepared for that, go elsewhere.”

The sign Redman posted after his surgery at the Bethesda Naval Hospital in late-September 2007. It went on to become a national statement and symbol for wounded warriors across the country. The original sign was signed by then-President George W. Bush and framed at the Walter Reed National Military Medical Center. (Jason Redman)

Redman recently sat down with Fox News to discuss his new book, "Overcome," and detail how he survived his daunting ordeal.

"It feels awesome. It feels like I've been given a second chance," Redman told Fox News. "I [tell myself], this is what you definitely should be doing. Pay it forward, and try to motivate and inspire other people."

Redman, 44, has lent his voice and experience to various charitable organizations geared toward helping combat veterans. He also founded a clothing line called "Wounded Wear" for soldiers who suffered amputations or facial disfigurement.

"Facial injuries are the worst because as humans, we speak to each other by looking at each other's faces," Redman said. "Anytime you have a facial disfigurement it causes people to do a double-take."

"Coming back from one of my surgeries in Chicago, I had a lot of people looking at me and it frustrated me," he continued. "So, I went home on the computer and I went to a make-your-own-T-shirt website and made a shirt with an American flag on the back, and I called it 'Wounded Wear.' On the front, it said, 'Stop staring. I got shot by a machine gun. It would have killed you.' And, that was the very first Wounded Wear shirt that we ever made."

His organization has helped thousands of wounded warriors and raised over $3 million for veterans, but Redman said he felt it failed to treat "the mental wounds" many combat veterans have faced.

"It made me realize that we can take guys hunting, fishing, help them find a job, but if we don't fix [the mental issues] first, none of that matters," he said. "We're basically slapping a Band-Aid on a sucking chest wound."

FORGING AND RE-FORGING OF A NAVY SEAL LEADER

Redman at the Combat Support Hospital in Baghdad on Sept 13, 2007 -- after emergency surgery, following the firefight that almost took his life. (Jason Redman)

Redman, who's lived in Chesapeake, Va., for almost 30 years, embraced two pillars of thought during his own recovery. The first was an acronym he called "REACT."

"R stands for, you've got to recognize the reality," he said. "When we are in a crisis or dealing with a problem, we push it off. We don't really want to deal with it.

"E stands for evaluating your assets," Redman continued. "If you recognize you have a problem, what are the things you can bring to bear to be able to deal with it? A is assessing possible options and outcomes. This is really critical. Once people finally understand they have a problem, we rush to get out of it and sometimes make things worse.

"C is choosing a direction and communicating it," he said. "You're never in a life ambush alone... The last one, T, is, you have to take action. You've got to execute."

Redman's second pillar: "The Pentagon of Peak Performance," in which he seeks to fulfill five elements of leadership, physical, spiritual and emotional in nature.

"This was something that took years to understand," he said. "Now having worked with thousands of wounded warriors, I saw a common thread. There were five key areas that if you're strong in, you're better prepared and balanced to deal with all the problems that come along."

Step one: "physical leadership." It involved devoting time to "fitness, nutrition and sleep," he explained.

"Your physical health plays such a [big] part in your ability to deal with stress and deal with depression," Redman said.

"Two is mental leadership," he continued. "What are you doing to educate yourself and get outside your comfort zone? What are you doing to surround yourself with like-minded people? Three is emotional leadership -- choosing positivity over negativity. In this day and age, social media and the media [itself], there's a lot of negativity in the media... How much time do you allow yourself to get put into that?"

"Four is social leadership," Redman said. "Who do you surround yourself with -- and investing in the right relationships. I started cutting out negative people in my life."

The husband and father of three has begun each day by reading Bible verses before starting his exercise regiment and nutrition program. He then would dive into "mental leadership" by educating himself on important topics, reading three books at a time and trying to devote 20 minutes a day to seeking knowledge. Two of his current books: "The Case for a Creator" by Lee Strobel and "1984" by George Orwell.

The combat veteran said he's had to sharpen his focus to deal with depression and self-doubt, but his system has better prepared him to face "the demon" within.

"Life ambushes are coming for all of us," he said. "This thing up inside our head is the most dangerous battlefield you'll ever be on. It's an insidious little beast and I call that little voice inside my head 'the demon.' And, he's a vicious little son of a bi---, and he will frequently tell me, 'You're not good enough. Who do you think you are?'"

Redman said his process would take time; it's not a silver bullet. But, people who stayed active and avoided self-medicating would have a better chance of climbing out of the pit and avoiding the ambush of negativity that ultimately could drag them down.

"Everybody in life has these hard moments, these sticking points. I call them the X," he said. "In military jargon, it's an ambush. You get stuck on the X. In life, we get stuck on the X. I talk about there being different levels of life ambushes. There [are] micro, mini and major life ambushes. So, micro-ambushes oftentimes are the most dangerous because they're the ambushes of the mind, and this is where depression comes in."

Redman added, "You got to get off that X, whatever that X is, and it was one of the things I talked to a lot of the wounded warriors about. You cannot sit there and feel sorry for yourself and ruminate and spiral down."

The most positive part of Redman's comeback was when he volunteered his time to veterans in need, he said. His ability to give hope to others was the driving force behind his miraculous recovery, and it has continued to fuel his actions to this day.

"It doesn't happen overnight," he said. "It's not this quick fix that we throw a switch and it just occurs. For me, when I was going through all that, I started to help other wounded warriors. That was a big thing for me. I like helping people. I like seeing people get better."

He added, "I like trying to motivate and inspire other wounded warriors out of that hard, dark time."