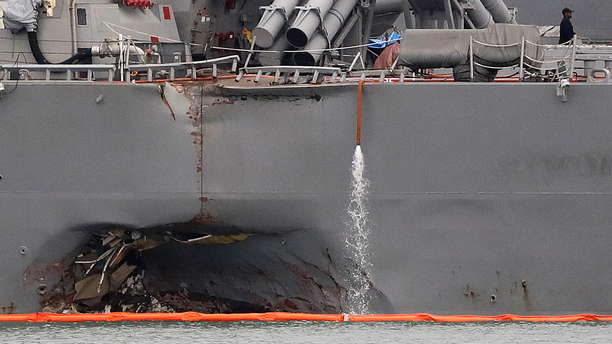 U.S. Navy leaders are recommending a sweeping list of changes in sailor training, crew requirements and safety procedures to address systemic problems across the Pacific fleet that led to two deadly ship collisions earlier this year that killed 17 sailors, according to a copy of the report obtained by The Associated Press.

A critical report scheduled to be released Thursday calls for about 60 recommended improvements that range from improved training on seamanship, navigation and the use of ship equipment to more basic changes to increase sleep and stress management for sailors.

Another Navy report released Wednesday concluded that three collisions and a ship grounding this year were all avoidable, and resulted from widespread failures by the crews and commanders who didn't quickly recognize and respond to unfolding emergencies. Navy leaders publicly acknowledged those failings in a congressional hearing last month.

The USS John S. McCain and an oil tanker collided near Singapore in August, leaving 10 U.S. sailors dead. And seven sailors died in June when the USS Fitzgerald and a container ship collided off Japan. The USS Lake Champlain collided with a Korean fishing vessel in May and the USS Antietam struck bottom near a shoal in Tokyo Bay.

As a result of the two deadly accidents, eight top Navy officers, including the 7th Fleet commander, were fired from their jobs, and a number of other sailors received reprimands or other punishment that was not publicly released.

"We are a Navy that learns from mistakes and the Navy is firmly committed to doing everything possible to prevent an accident like this from happening again," Adm. John Richardson, the chief of naval operations, said in a statement Wednesday. "We will spend every effort needed to correct these problems and be stronger than before."

Richardson ordered a comprehensive review of the accidents, led by Adm. Philip Davidson, head of the Navy's Fleet Forces Command. In a report spanning about 170 pages, Davidson notes that many of the lessons learned can be applied across the Navy. And he recommends the appointment of a senior Navy officer to oversee the implementation of the recommended changes across the fleet, both in the Pacific and -- where needed -- around the world.

Proposed changes focused on five main areas: fundamental skills, teamwork, operational safety, assessment procedures and culture. Specifically, the recommendations include beefing up qualification standards for sailors who stand watch -- a key point of failure in the two deadly collisions. Others call for improved navigational skills and certifications for sailors, including better, more sophisticated training on radar, piloting, communications and other high-tech equipment.

The report acknowledges the fast-paced operations in the Pacific region, where the Navy is faced with an aggressive China and a growing threat from North Korea's pursuit of nuclear weapons. And it notes that ongoing budget constraints make it difficult to meet the requirements in the very busy Pacific region.

"The ability to supply forces to the full demand is - and will remain - limited," the report said, adding that funding shortfalls for readiness across the Navy, "did have an impact in putting more pressure to meet increasing demand for Japan-based assets" without additional support from ships based in the United States.

Faced with the increasing demands, there was less time for crew members to do needed training or certifications, the report said.

The report also noted that despite the growing pressure and pace of operations, there was a "can-do" culture that persisted, and commanders failed to listen to their teams and were unable or unwilling to say no despite the risks.

"Can-do should never mean must-do so we must continue to encourage our commanders to accept the risks when the benefit to be gained is worth the potential risk of failure," the report said.

A number of the recommendations points to fatigue and how the lack of sleep can lead to problems, particularly as sailors stand watch.

"Sailors need to know when they must succumb to their own fatigue, be proactive about their fatigue management plan, and reach out to leadership," the report said. It also suggested that a mentorship program be set up, assigning experienced commanding officers to help sailors develop leadership skills and focus on seamanship, navigation, team building and operational safety.

Davidson's report was submitted to Richardson, and Navy officials said a number of the recommendations are already being addressed.