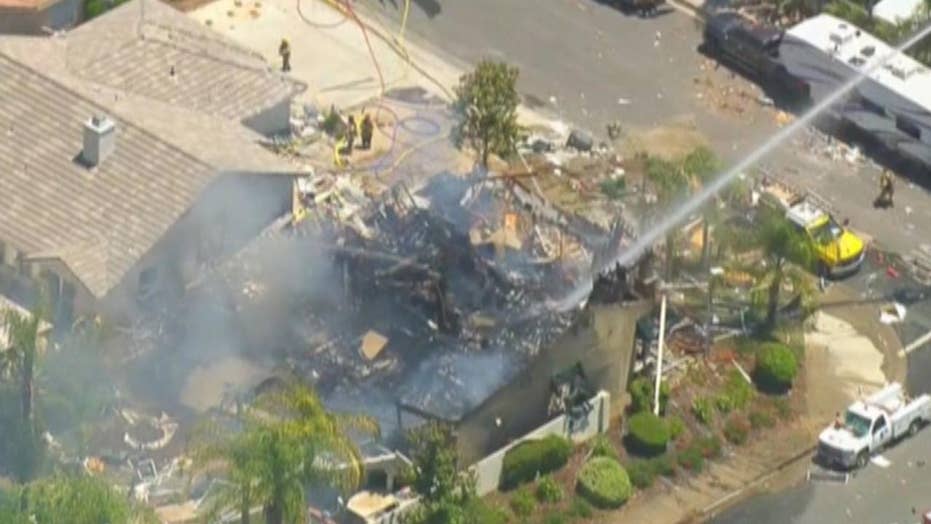 SoCalGas crews were on scene fixing a natural gas line which was reportedly damaged by a contractor when the explosion ripped through the home killing at least one and injuring 15 in Murrieta.

A gas company worker was killed and more than a dozen people were hurt when a natural gas explosion leveled a home in Southern California on Monday, according to officials.

The blast took place shortly after noon in Murrieta, located about 80 miles southeast of Los Angeles. Firefighters and Southern California Gas Co. workers had gone to the home after a report that a contractor had damaged a gas line.

SoCalGas officials told FOX11 the contractor did not call 811, a phone number to notify utility companies about projects that involve digging so that the utility companies can safely mark all buried lines, before him and his team began digging.

A firefighter and civilians train fire hoses on a burning home after an explosion and fire destroyed the home in Murrieta, Calif., sending up thick flames and closing several streets. One Southern California Gas Company employee was killed. (Andrew Foulk via AP)

The explosion sent up a wall of fire and smoke and rocked nearby homes before the gas was shut off and the fire doused more than an hour later.

A house in Murrieta, Calif. caught fire and exploded on Monday as a result of a gas line rupture, killing a gas company worker and injuring 15 others. (KTTV)

Photos from the scene showed the home virtually torn apart, with flames burning about 20 feet high.

Neighbors said the explosion shattered windows throughout the neighborhood. Jessica Molstad who lives nearby told FOX11 that, at first, she thought the blast was an earthquake after other recent temblors.

Kevin McKinney, 63, lives in a home next door that was damaged by the blast. There was "just a huge, huge explosion and then I heard screams and went outside," he told the Riverside Press-Enterprise.

In a statement posted to Twitter, SoCalGas said its "deepest sympathies are with all those impacted by the Murrieta incident."

"Sadly, we lost one of our technicians today. He will be greatly missed," the company said. "We urge all contractors & homeowners to call 811 to have utility lines marked prior to digging of any sort."

The identification of the worker that was killed has not yet been released. The investigation into the deadly blast is ongoing.