The National Guard says 5,000 troops will remain in the nation’s capital through mid-March, Fox News has learned.

"As we continue to work to meet the final post-inauguration requirements, the National Guard has been requested to continue supporting federal law enforcement agencies with 7,000 members and will draw down to 5,000 through mid-March," the Guard said in a statement.

"We are providing assistance such as security, communications, medical evacuation, logistics, and safety support to state, district and federal agencies."

The National Guard was in the process of meeting with various federal agencies to "determine their requirements" for troops to stay beyond January, an official had told Fox News earlier Friday.

Around 25,000 Guardsmen deployed to Washington D.C., ahead of President Biden's inauguration after the deadly Jan. 6 siege of the U.S. Capitol where authorities were badly outnumbered by pro-Trump supporters. 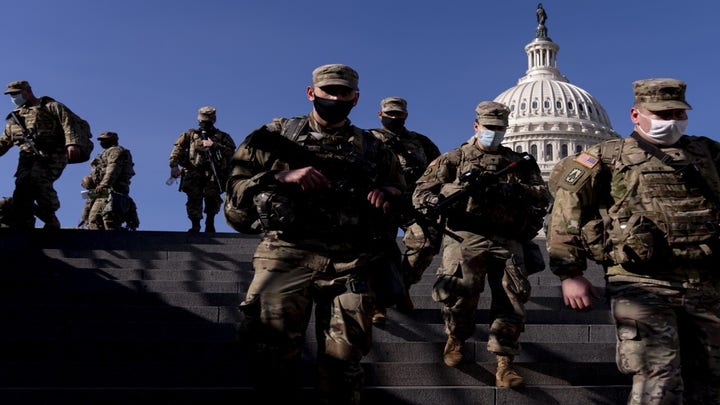 The ceremony went off with only a few minor arrests. About a dozen Guard troops were removed from their posts after being vetted by the FBI, including two who made extremist statements about the event.

In a statement Thursday, the National Guard said about 7,000 troops would remain in Washington through the "end of the month." But there is concern among some city and federal authorities that protesters might return to Washington in early March on the original presidential inauguration date, March 4.

Six southern states left the union after Abraham Lincoln was elected in November and before his inauguration in March, a period known as "Secession Winter."

The 20th Amendment moved the inauguration to its present Jan. 20 date. Franklin D. Roosevelt was the first president sworn into office on that date when he began his second term in 1937.

Before the ratification of the 20th Amendment in 1933, the new president was not sworn until the March following the election.

Members of the DC National Guard walk around the U.S. Capitol grounds on Jan. 7 in Washington. A few thousand troops could remain in the capital until mid-March, Fox News has learned. (AP Photo/Julio Cortez)

Lawmakers from both political parties were fuming this week after learning that troops were forced to take rest breaks outside the Capitol. Images circulated online showing Guardsmen camped in a cold garage, which prompted bipartisan calls for an investigation.