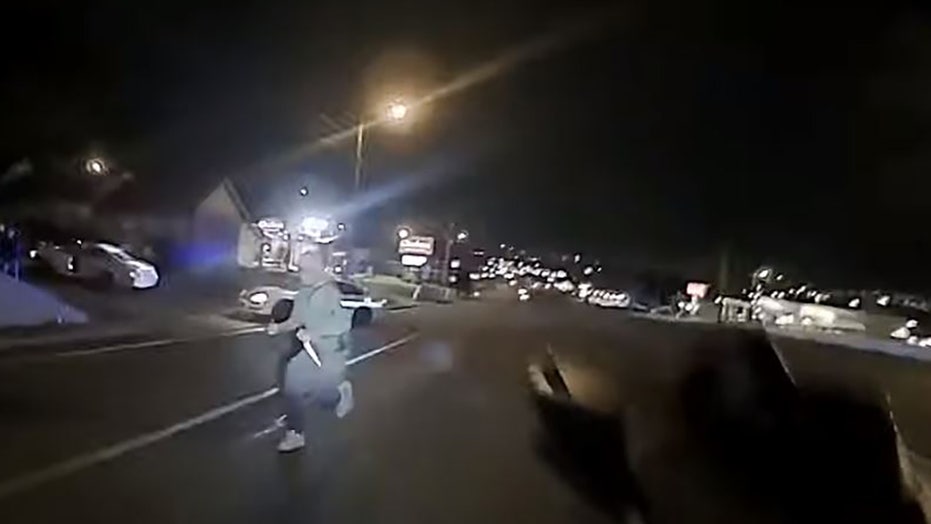 Nashville police released body camera footage Saturday showing an officer fatally shoot a man who charged at him with two butcher knives during a traffic stop about a potentially stolen vehicle.

Metropolitan Nashville Police Department Chief John Drake said it appeared Officer Christopher Royer was "possibly justified" in shooting the knife-wielding man. He said the officer was left with "no choice" but to shoot after he retreated and asked the indiviudal to drop the weapons several times -- even as the man entered the driver's door of the police car and charged toward the officer.

"No officer wants to encounter these types of situations. It's always the unknown when we respond to calls and he did everything he could. He retreated. He ordered him to put the knives down," Drake said. "This appears to be possibly justified. We'll find out once the investigation moves forward but officers are put in these situations, and it's unfortunate."

Drake also rejected the notion Royer should have used a Taser to deescalate the situation, telling reporters an officer "can't use a less lethal [force] if someone is attacking you with a knife."

Officer Royer was on "routine patrol" just before midnight in the area of Clarksville Pike and Ed Temple Blvd. when he checked the license plate of a white late model Mercedes sedan, police spokesman Don Aaron said at a press conference on Saturday.

"The driver presented no issues at any time," Aaron said at the press conference. "The passenger, however, immediately got out of the Mercedes with two large butcher knives, one in each hand, and began running around erratically."

"Stay over there," the officer yells to the driver who by then had gotten out of the Mercedes.

"What are you doing man?" the officer says. "I did not want to have to do that."

The man died shortly after arriving at Vanderbilt Medical Center, Aaron said. He has not been publicly identified by authorities. Royer is a four-year veteran of the Nashville Police Department, and, per policy, was placed on administrative assignment as the Tennessee Bureau of Investigation and Davidson County District Attorney’s Office investigate and analyze this incident, Aaron said.

"Our police department will also be conducting an administrative review of this action to ensure it meets the high standards that is expected of our officers," he added.

The man got out of the Mercedes with two large butcher knives, one in each hand, police said. (Metro Nashville Police Department)

"When I got the call this morning, I had mixed emotions especially with all that’s going on around the nation and this city," Nashville Chief of Police John Drake said. The shooting happened just days after former Minneapolis police officer Derek Chauvin was convicted of the murder and manslaughter of George Floyd last May.

Even with the guilty verdicts handed down, criticism of law enforcement across the country has persisted, specifically over officer-involved shootings of Black people. In one recent incident last week, protests erupted in Columbus, Ohio even after released body camera footage showed 16-year-old Ma’Khia Bryant lunging at another young woman with what appeared to be a knife before the police officer responding to a 911 call fatally shot her.

In Nashville, Drake said the body camera video does not show that five other officers later arrived at the scene and rendered aid to the individual after he was shot. "No officer wants to deal with this type of situation as Officer Royer encountered tonight. He did everything he could, I felt. He retreated. He asked the individual to drop the weapon several times," the police chief said. "He continued charging at him and he was left with no choice."

The driver of the Mercedes is not in custody and was compliant with Officer Royer, Drake said. Explaining the reason for the vehicle stop, the chief said Nashville sees about 3,000 stolen vehicles a year and "officers run tags all the time to determine if vehicles are stolen or not."

"I’m sure he did have a Taser, our officers are issued Taser, but in those situations – that’s a lethal situation," Drake said. "He deescalated by retreating, he moved backwards, again ordering the individual to drop the weapon… You can’t use a less lethal if someone is attacking you with a knife."

Drake said drugs, namely marijuana in "individual plastic bags," was found at the scene but what prompted the individual’s "rather bizarre behavior" as he got out of the vehicle with two knives and ran toward the officer remains under investigation at this time.