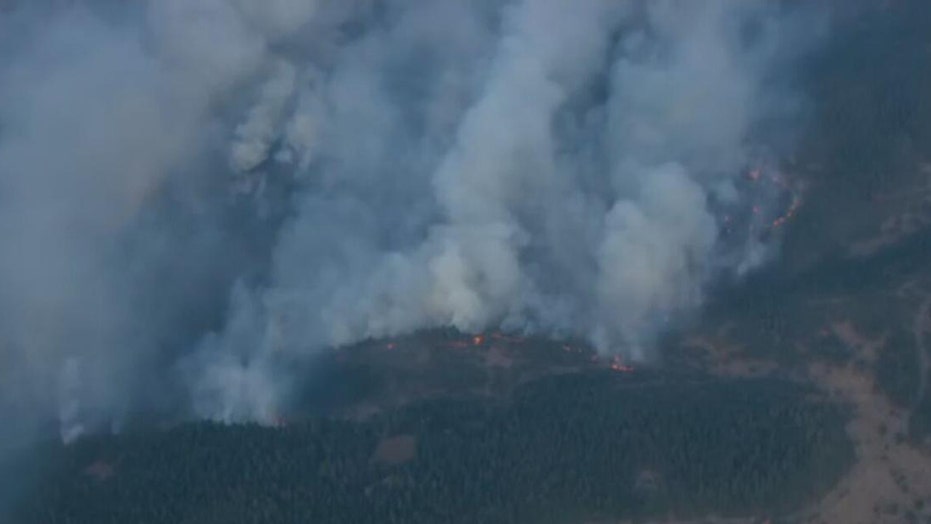 Hundreds of homes in Oregon's Columbia River Gorge are threatened by a wildfire that's scorched hundreds of acres after igniting on Wednesday, according to officials.

The Wasco County Sheriff's Office said shortly after 5 p.m. it was " inundated with calls" about a blaze in the town of Mosier, located about 70 miles east of Portland.

"I ask Oregonians to remember that preventing wildfires is critical this year. Be cautious and honor all burn bans," the governor tweeted.

According to the sheriff's office, the fire has now burned at least 500 acres, drawing the response of local and regional fire departments.

The Mosier Creek Fire has grown to about 500 acres.

"Crews will be working the fire overnight and patrolling for any unexpected boundary changes," the sheriff's office said. "Please refrain from entering this area unnecessarily so as to not hinder any fire suppression work."

Christie Shaw, a spokesperson for the Oregon Department of Forestry, told OregonLive the blaze started as crews were mopping up another fire in the same area along Interstate 84 near Mosier. She said crews contained that fire at about two acres.

Shaw said investigators do not immediately know the cause of either fire.

Winds caused the second fire to spread, and around 6 p.m., the Wasco County Sheriff’s Office issued evacuation orders for people who live on several roads in the Mosier area. Other nearby residents were told to be ready to evacuate the area if necessary.

The blaze quickly grew from 50 acres to 200 before reaching 500 acres less than two hours later.

Video from FOX12 showed some types of structures appearing to burn as the blaze spread.

Brown said in a statement the blaze is threatening 300 homes. Residents of Osburne Cutoff, Vensel, Catron, Dry Creek, Carroll, Morgenson, and from Chenoweth Airport to Vensel/Ketchum road are all various evacuation orders.

One resident in an evacuation zone told FOX12 she was coming home when she saw the smoke and quickly went about packing up belongings and valuables into her car. Karyn Hart said she's done everything and was just hoping for the best.

"My friend, he's one of the pilots that is a water bomber, and he called me and said he made sure to dump a lot of water near the end of the ranch where the fire is coming up," Hart said. "He said the good news is that the wind is starting to settle down, and so they're going to have a chance to get the fire under control now."

The Oregon State Fire Marshal will assume command of the blaze on Thursday morning and will work to bring resources from counties around Oregon to assist in the response.

The governor's office warned that fire danger levels will be on the rise in Oregon, with a warming trend this weekend into next week.