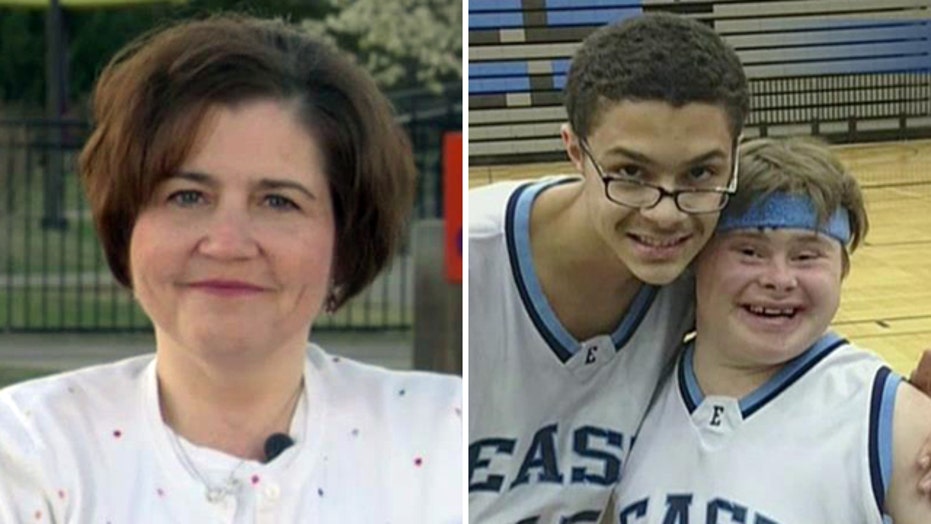 The mother of a Kansas special-needs teenager -- who was told he can’t wear a varsity letter jacket because he isn’t a varsity athlete -- said Tuesday she will continue to fight for the league to change its rule.

Jolinda Kelley, the mother of 19-year-old Michael Kelley, who plays on his high school’s special-needs basketball team, told Fox News’ “Fox & Friends” that she was at a school board meeting Monday night and was given 3 minutes to make her argument that the school should allow special-needs students to wear the same varsity letters as their peers.

School board member Lynn Rogers said she would be willing to look at making a districtwide policy to make sure students are being treated fairly.

Michael Kelley has Down syndrome and autism and participates in extracurricular special-needs basketball. He is not a varsity player.

"He's earned the letter just like any other varsity athlete has," Kelley said.

His mother praised his coaches and the quality of his education and reiterated that her issue is only with the policy. She told KSN-TV Friday that her adopted son is a one-of-a-kind kid who loves to play basketball.

She bought him a varsity letter that is the same as the one worn by East High’s varsity basketball team that just won the state championship. Kelley said Michael was told he couldn’t wear his letter jacket and was given a girl’s sweatshirt to wear instead.

Ken Thiessen, the principal of East High School in Wichita, wrote an open letter after the story’s coverage on Friday. He said the school stands by its record on building character and its programs for students with special needs.

He said if the league decides to change the letter design to make it identical, he would support the measure.

"Our administrators, our teachers and staff, as well as our entire student body, value ALL of our students. This is continually demonstrated in our activities, our celebrations, our honors and the daily way our school conducts itself," his statement said, according to KAKE.com.