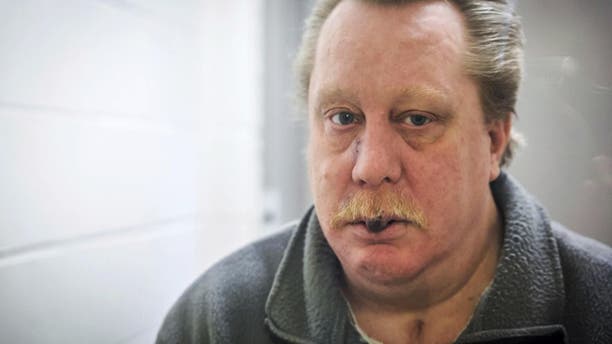 This undated photo provided by Jeremy Weis Photography, shows Russell Bucklew, who is scheduled to die by injection Tuesday, March 20, 2018, for killing a former girlfriend's new boyfriend in 1996 in eastern Missouri. Bucklew faces a potentially "gruesome and painful" execution because of a rare medical condition that compromises the man's veins and causes multiple tumors in his head and throat, his attorney said Sunday. (Jeremy Weis Photography via AP)

The U.S. Supreme Court granted a stay of execution for the second time in four years on Tuesday to a Missouri inmate who has a rare medical condition that he says could cause blood-filled tumors to burst inside his head during the lethal injection.

Russell Bucklew was scheduled to die by injection Tuesday evening for killing a former girlfriend’s new boyfriend during a violent rampage in 1996. He would have been the first Missouri prisoner put to death since January 2017.

In a statement just before the lethal injection was set to begin, the Supreme Court said it granted the stay of execution. The four conservative justices disagreed — John Roberts, Clarence Thomas, Samuel Alito and Neil Gorsuch — disagreed with the decision.

Bucklew, 49, was also within an hour of execution in May 2014 when the U.S. Supreme Court halted it over concerns about Bucklew’s rare medical condition, cavernous hemangioma. The ailment causes weakened and malformed blood vessels, tumors in his head and throat and on his lip, and vein problems.

His attorney, Cheryl Pilate, said Bucklew’s condition has only gotten worse since then.

The tumor on Bucklew’s lip has grown substantially since 2014 and is now the size of a grape, Pilate said. She believes the internal tumors have grown, too, and would likely rupture and bleed during the execution, potentially causing Bucklew “to choke and cough on his own blood during the lethal injection process.”

Missouri Attorney General Josh Hawley disagreed, writing in his filing to the Supreme Court that the growth in Bucklew’s mouth shrunk 10 percent between 2010 and 2016.

The condition also compromises his veins, and Pilate said the fatal injection couldn’t be administered in the typical way through an arm vein. Hawley wrote that the lethal dose of pentobarbital could be administered through a leg or other vein instead of the arm.

Pilate also had asked for clemency from Republican Gov. Eric Greitens. A spokesman for the governor declined comment.

Bucklew’s appeals have suggested that if the execution is carried out, the state should use lethal gas instead of an injection of pentobarbital. Missouri law still provides for the option of lethal gas, but the state no longer has a gas chamber and has not used the method since 1965.

None of the 20 inmates executed since Missouri began using pentobarbital in 2013 have shown obvious signs of pain or suffering.

Bucklew became angry when his girlfriend, Stephanie Ray, ended their relationship in 1996. Hawley said in court filings that Bucklew slashed Ray’s face with a knife, beat her and threatened to kill her. She took her children and left.

Over the next two weeks, Bucklew stalked Ray, even as he stole a car, firearms, two sets of handcuffs and duct tape. He eventually found out where she was staying and broke into the southeastern Missouri trailer home of Michael Sanders, Ray’s new boyfriend, fatally shooting him. When Sanders’ 6-year-old son came out of hiding, Bucklew shot at the boy and missed.

Bucklew pistol-whipped Ray, put her in handcuffs and dragged her to his car, where he raped her.

Police pursued Bucklew — a chase ending in a gunfight that wounded an officer. Once in jail, Bucklew managed to escape and went to the home of Ray’s mother, where he attacked her with a hammer before he was finally captured.