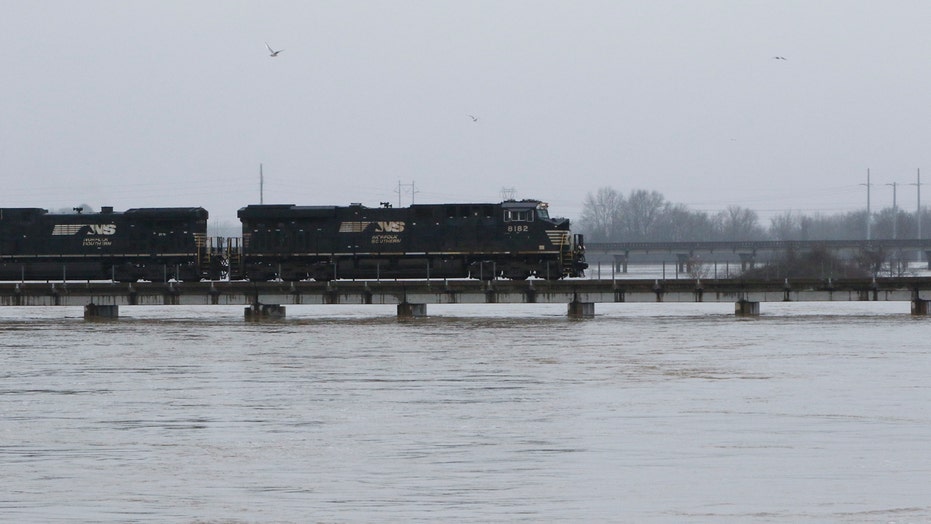 JACKSON, Miss. – Authorities in Mississippi were bracing Sunday for the possibility of catastrophic flooding in and around the state capital of Jackson as water levels rise precipitously in a river swollen by days of torrential rain.

Mississippi Gov. Tate Reeves said water from the rain-swollen Pearl River would continue to rise throughout the day, and he warned the state is facing a “precarious situation that can turn at any moment.”

Officials called on residents to pay attention to evacuation orders, check on road closures before traveling and stay out of flood waters — warning that seemingly placid waters could mask quickly moving currents and pollution.

A parked tractor trailer's reflection is seen on a flooded street in downtown Jackson, Miss., as flooding from the Pearl River continues to impact several communities along its bank, Sunday, Feb. 16, 2020. (AP Photo/Rogelio V. Solis)

Law enforcement officials have been going door to door telling people in affected areas to evacuate, Reeves said. Rescuers performed four assisted evacuations but said that none were needed overnight.

“We expect the river to continue to rise over the next 24 hours or so, “ Reeves said during a news conference in Jackson. “We are not out of the woods yet.”

The National Weather Service reported Sunday on its Twitter feed that the river was expected to crest in the Jackson area at 37.5 feet on Monday. That is slightly down from the 38 foot crest that had earlier been projected to occur on Sunday. The weather service said the river is currently at 36.42 feet in Jackson — the highest it has been since 1983. The Pearl River crested at 43.2 feet on April 17, 1979 — its highest level. The second-highest level occurred May 5, 1983, when the river got up to 39.58 feet.

FLOODS IN SOUTH CAUSE FISH TO WASH UP ON FARMLAND, MISSISSIPPI DAM THREATENED

A vehicle carefully passes through a flooded street in downtown Jackson, Miss., as flooding from the Pearl River continues to impact several communities along its bank, Sunday, Feb. 16, 2020. (AP Photo/Rogelio V. Solis)

Officials last night released water from a nearby reservoir — the Ross Barnette Reservoir — to cope with the rising river levels. They called on residents in northeastern Jackson who live in the flood zone to leave immediately. By Sunday morning, Reeves said the inflow and the outflow of the reservoir had equalized.

Reeves said once the river crests Monday it will take three to four days before the waters start to significantly go down. Part of the reason is that forecasters are expecting several inches of rain between midday Tuesday and Wednesday evening.

”It will be days before we are out of the woods and waters start to recede,” the governor said.