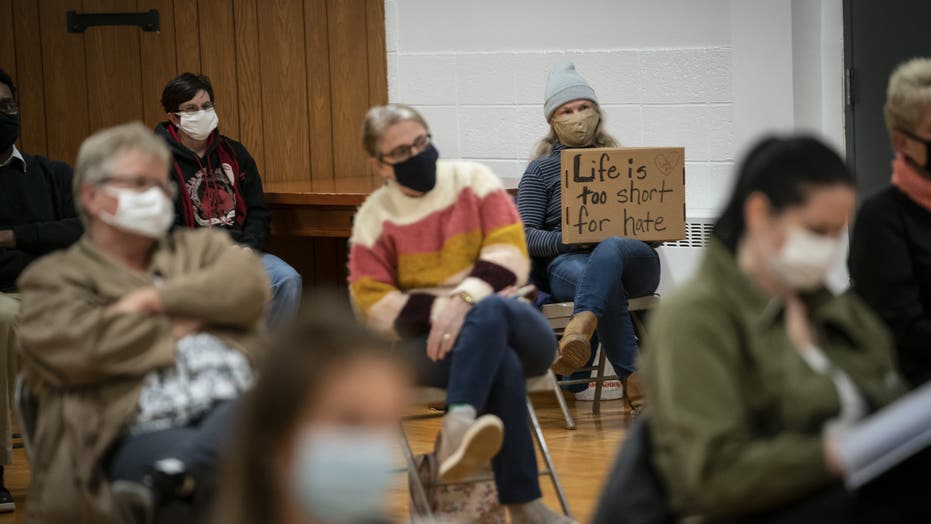 Residents packed a town hall in a tiny western Minnesota community to voice opposition to plans by a controversial Nordic heritage church that has been identified as a White supremacist group.

The Asatru Folk Assembly bought an abandoned Lutheran church in the Swift County town of Murdock and wants a permit to turn it into a Midwest regional gathering hall.

Nearly 50 people in the town of 275 filled the hall for a special city council meeting Wednesday night, wearing masks and sitting 6 feet apart to help prevent the spread of the coronavirus. Most opposed the AFA's permit request.

Lawyer and member of the Asatru Folk Assembly Allen Turnage returns to his seat, Wednesday, Oct. 14, 2020, in Murdock, Minn., after taking questions from the public and the council during a city council meeting for public discussion on the proposal to grant a permit to the Asatru Folk Assembly. (Renee Jones Schneider/Star Tribune via AP)

AFA board member Allen Turnage told the crowd the church would not admit a Black person “because they’re not of northern European descent.”

The AFA is among groups that seek to practice a pre-Christian, European spirituality and, according to a statement on its website, it's pro-White. The Southern Poverty Law Center has added the AFA to its list of hate groups.

The church the Asatru Folk Assembly bought and is requesting a permit to use as a regional church is seen Wednesday, Oct. 14, 2020, in Murdock, Minn. It currently only has a residential permit. (Renee Jones Schneider/Star Tribune via AP)

Murdock resident Pete Kennedy said he doesn't want his hometown to be known as the hate capital of Minnesota, the Star Tribune reported. The council plans to vote on the church’s permit at a Nov. 4 meeting.

Turnage said the AFA has about 500 members nationwide and 20 or so in and around Minnesota.