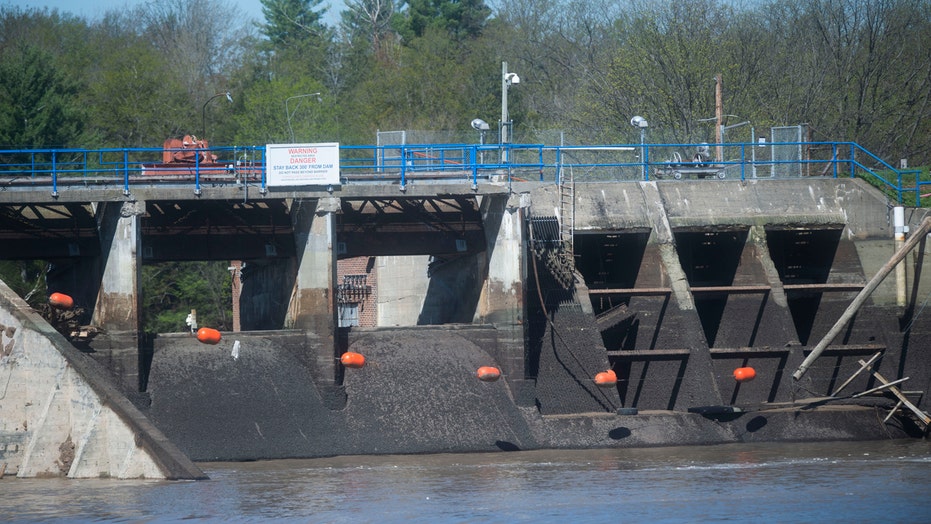 Michigan's governor declares a state of emergency as thousands are evacuated from the area; Mike Tobin reports.

The owner of a dam in Michigan that failed to hold back floodwaters on Tuesday had its license revoked by federal regulators in 2018 over numerous violations and concerns about withstanding a significant flood, according to federal records.

The Edenville Dam, on the border of Midland and Gladwin counties, failed late Tuesday, causing another dam downstream to be overtopped by water and forcing mass evacuations along the Tittabawassee River. The city of Midland faced the possibility of seeing 9 feet of floodwater downtown.

"This is an event unlike anything we've seen before, and we've all got to do our part," Michigan Gov. Gretchen Whitmer said at a news conference Wednesday afternoon.

Whitmer, who described the damage as a 500-year-flood event, said it is "going to have a major impact on this community and on our state for the time to come."

This footage, filmed by Anthony Clark on May 20, shows an aerial view of Floodwaters in Midland, Mich. can be seen on May 20, 2020 after two dams in were overtaken following heavy rainfall, forcing the evacuation of communities downstream. (Anthony Clark via Storyful)

According to the governor, the Tittabawassee River is forecast to crest around 8 p.m. on Wednesday in Midland, a city of 42,000 people.

This footage, filmed by Anthony Clark on May 20, shows an aerial view of floodwaters in Midland, Michigan, after two dams were overtaken following heavy rainfall, forcing the evacuation of communities downstream. (Anthony Clark via Storyful)

"The water is continuing to rise, albeit at a slower pace, and that's why we need to take this seriously," Whitmer said, urging residents who may not have evacuated to get to safety. So far, no deaths or injuries were reported as a result of the flooding.

"This is going to be hard, but we are anticipating several feet of water across this area," the governor added.

Whitmer also urged residents who may not have evacuated to get somewhere safe immediately. So far, no deaths or injuries have been reported as a result of the flooding.

Boyce Hydro Power, which operated the breached Edenville Dam before agreeing to sell it this year, had failed for years to make repairs to it, according to FOX2.

This photo shows a view of the Edenville Dam on Wixom Lake in Edenville, Michigan, May 19. (Kaytie Boomer/The Bay City Times via AP)

In 2018, the Federal Energy Regulatory Commission (FERC) ordered the company to shut down all electric-generating equipment. The biggest concern from the regulatory commission was the potential for the dam to fail if floodwaters rose too much.

The area saw heavy rain earlier this week, which allowed for water from a nearby lake to spill through the barrier. 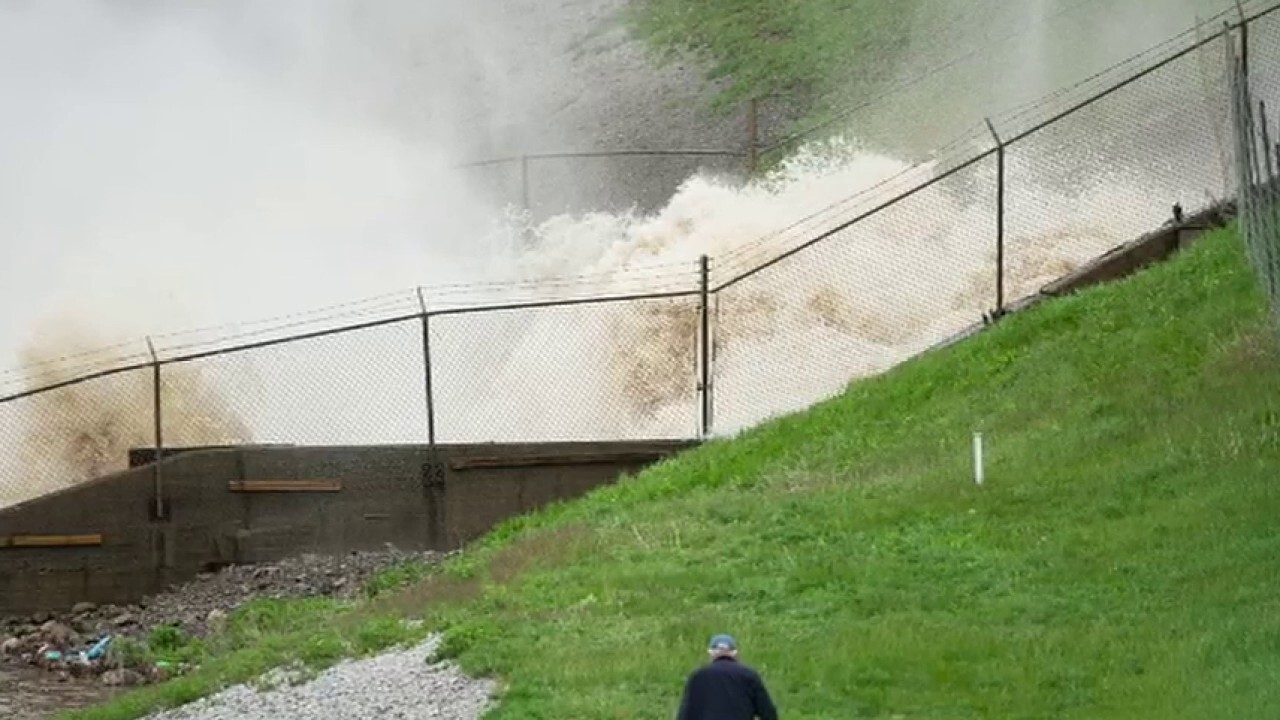 Floodwaters are rising at a rapid rate after two dams are breached in Midland, Michigan.

The FERC's report concluded the dam's capacity for overflow was 50 percent of the maximum potential flooding. The National Weather Service (NWS) warned that the river that broke through on Tuesday will crest at 38 feet -- 4 feet higher than the record set in 1986.

Other issues at the Edenville Dam had been raised to Boyce by federal officials.

The company first acquired the dam in 2004, but reported violations followed as it continually requested extensions for new projects to repair structural issues, according to FOX2.

"Since 2004, the licensee has repeatedly failed to comply with schedules for filing plans and completing measures and has frequently and repeatedly requested more time to complete requirements," the commission responded when Boyce Hydro Power sought a stay after FERC ordered its license revoked.

The remains of the Edenville Dam, as seen on Wednesday, May 20, 2020 in Edenville Township north of Midland. (Jake May/The Flint Journal, MLive.com via AP)

Lee Mueller, Boyce's architect and co-member manager, declined comment to the Detroit Free Press, telling the paper: "At present, we are focused on the continuing operations of the other hydroelectric facilities that are fully functioning."

In 2018, the state rated the Edenville Dam -- built in 1924 -- in unsatisfactory condition. The Sanford Dam, which was built in 1925 and overtopped by floodwaters Tuesday, received a fair rating.

Both dams are in the process of being sold.

This footage, filmed by Anthony Clark on May 20, shows an aerial view of floodwaters in Midland, Michigan, after two dams were overtaken following heavy rainfall, forcing the evacuation of communities downstream. (Anthony Clark via Storyful)

Whitmer said Wednesday the state of Michigan is reviewing "every line of legal recourse we have" to determine responsibility for the failed dams and flooding.

"This incredible damage requires that we hold people responsible," the governor told reporters. "The initial readout is that this was a known problem for a while and that’s why it's important that we do our due diligence and take action."

This footage, filmed by Anthony Clark on May 20, shows an aerial view of Floodwaters in Midland, Michigan, after two dams were overtaken following heavy rainfall, forcing the evacuation of communities downstream. (Anthony Clark via Storyful)

Midland City Manager Brad Kaye said the Sanford Dam is overflowing, but "it's not entirely clear what the structure" is like underneath.

"We don't know, quite frankly, whether the entire structure is gone or just parts of it is gone," Kaye said.

People help each other travel from one home to another using an inflatable raft on Oakridge Road on Wixom Lake, May 19, in Beaverton, Michigan. (Katy Kildee/Midland Daily News via AP)

FERC said Wednesday it has directed Boyce Hydro to establish an independent investigation team to determine the cause of the damage to Sanford Dam, and that it would reach out to state officials regarding the Edenville Dam. It will send an engineer to assist with the investigation when it’s safe to do so.

In response to the floodwaters, several shelters in high schools and family centers opened across the region, FOX2 reported.

Mark Musselman brings a chair to the front of his house from the back yard, wading through floodwater, May 19, in Edenville, Michigan. (Katy Kildee/Midland Daily News via AP)

Michael Sharrow, the superintendent of Midland Public Schools, said Tuesday night that a "large crowd" of elderly residents was at Midland High School.

"Our community cares for each other.  We're working hard to open our homes and shelters to our friends and neighbors," Midland County said on Twitter "That's no small task as we are displacing about 10,000 people tonight!"

The governor encouraged people to do their best to take precautions to prevent the spread of coronavirus, such as wearing a face covering and observing social distancing “to the best of your ability.”

As of Wednesday, there were 52,350 cases of COVID-19 in Michigan with at least 5,017 deaths, according to Johns Hopkins University.

But while the state has a high overall number of infections, Midland County has had only a small number of confirmed cases, with fewer than 80 infected and less than 10 deaths. Still, some dealing with the flooding and evacuations remained aware of the dangers posed by the virus.

Cots at some area schools set up Tuesday as shelters were spaced apart to adhere to social distancing guidelines.