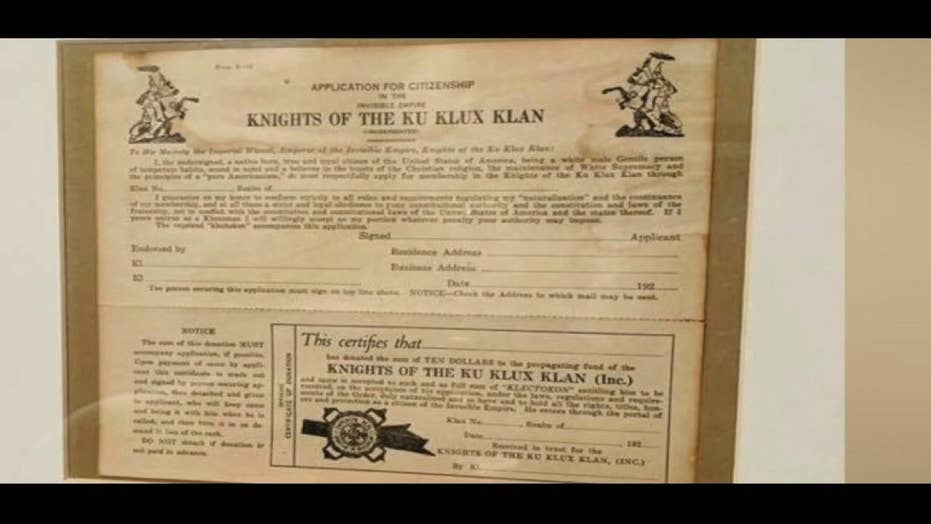 Rob Mathis said the house near Muskegon was filled with confederate flags and had a framed KKK document on a wall.

A Michigan police officer who was put on leave after a potential homebuyer found Ku Klux Klan memorabilia in the officer's house was fired Thursday following an investigation.

Peterson said a redacted version of the inquiry report would be released to the public next week.

The investigation was prompted when Rob Mathis, who is black, and his wife were touring Peterson's home last month, with an eye toward a possible purchase. They reportedly found a framed KKK membership application hanging on a wall, along with Confederate flags.

“In the bedroom, right across … there was a plaque up there, all by itself," Mathis told a local news outlet.

He described what he saw in a viral Facebook post that prompted city officials to look into the matter. The inquiry was intended to determine whether Anderson, who is white, violated city policy.

“Some questions arose that we’d like to have further answered," Muskegon Police Chief Jeffrey Lewis told city commissioners during an Aug. 27 meeting to announce the end of the inquiry. “But I can tell you this, after reviewing this -- and it was a quite lengthy investigation -- what you saw on social media pretty much stands the way it is."

“There was no smoking gun revealed to us or anything that shocked us," he added.

Anderson had been on the force since 1997. He was cleared of wrongdoing in the 2009 fatal shooting of an unarmed black man following an investigation.

A report by then-Muskegon County Prosecutor Tony Tague found that Julius Johnson hit Anderson in the head with a police radio and "another blunt object" and noted that Anderson was forced to get a metal plate installed in his head.

Mathis said he was "glad the city was moving forward in a positive direction." He also said Anderson's firing would do little to change a police culture where officers protect each other and fail to hold one another accountable, MLive reported.

“There are other officers within the police force that have been to Anderson’s home and were well aware of the Confederate flags,” Mathis claimed. "[Officers who] contributed to that behavior, instead of saying we as a police force are supposed to have good attitudes when making decisions for our community.

“These KKK applications, flags, they’re not indicative of people who should protect and serve our community.”