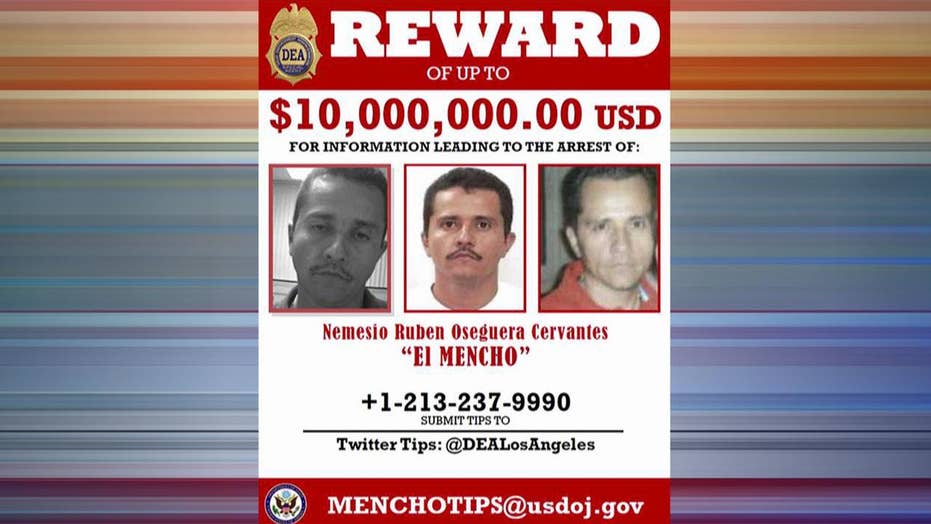 Appearing on "Fox & Friends" on Tuesday, Follis said the Mexican drug kingpin's distribution models and renewed tactics are what makes him so deadly and his reach so extensive. They're also why small-town America is being devastated.

According to a nine-month investigation by Louisville Courier-Journal, El Mencho is infiltrating cities and towns across America and has a presence in at least 35 states.

El Mencho leads one of the most violent drug cartels in the world, Cartel Jalisco Nueva Generacion (CJNG), which has quickly grown into one of the world's largest criminal organizations over the past few years — it's been accused of acts of terrorism, kidnappings, murders and even cannibalism.

Their reach extends to every continent except Antarctica and the group is more than 5,000 members strong, the Courier-Journal reported.

El Mencho's group is also flooding the U.S. with thousands of kilos of methamphetamines, heroin, cocaine, and fentanyl every year — roughly one-third of the drugs entering the United States, fueling the nation's overdose crisis.

"[El Mencho] has bypassed and supplanted the traditional old-guard network of those large distribution models," said Follis, author of the book "The Dark Art: Undercover in the Global War Against Narco-Terrorism."

"He's taken his minions, his operatives, from Jalisco New Generation Cartel and dispatched them throughout the midwest, northeast, and southeast regions of America where there is this appetite, there this addiction, there's suburban rural desire and market for the retail market," he told host Steve Doocy.

Follis explained that Joaquin "El Chapo" Guzman, who was sentenced to life behind bars in July, represented the "old model," which focused on the wholesale distribution of narcotics, whereas El Mencho is taking his product right to the streets.

He said that thousands of operatives have infiltrated rural American markets and "principally own them in a low-profile, nontraditional, approach."

"They've turned everything upside down," he told Doocy.

Chris Evans, who runs the DEA's day-to-day global operations, told the Courier-Journal the drug empire is "putting poison on the streets of the U.S." and that it's "important for all Americans to understand the threat to their community and what might impact their everyday lives."

The price on El Mencho's head is $10 million and he is on the DEA's most wanted list.

The Courier-Journal contributed to this report.