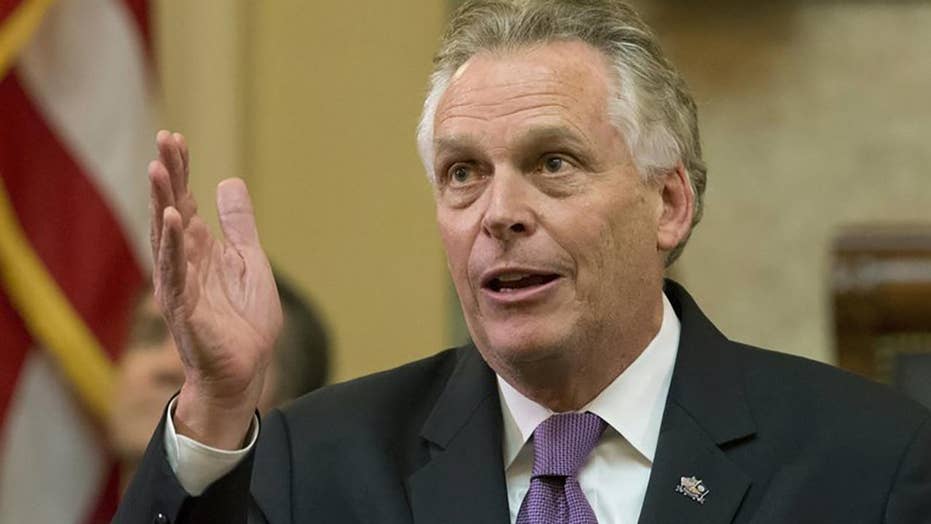 Terry McAuliffe testing the waters for a 2020 presidential run

The former Virginia governor is 'going through the process' of talking to Democrats about his place in the more progressive field; Peter Doocy reports from Washington.

The Virginia Democratic nominee for governor is dismissing as a "right-wing conspiracy" the concerns that many have raised about racial trainings and curricula in the state.

In audio obtained by Fox News, McAuliffe blames the ongoing controversy – which has exploded school board meetings – on his opponent Glenn Youngkin and former President Trump.

"That's another right-wing conspiracy," he said. "This is totally made up by Donald Trump and Glenn Youngkin. This is who they are. It's a conspiracy theory."

A woman had asked him: "I was just wondering – with all of the Republicans talking about critical race theory, and they're making this huge deal about it, and it's all of the conversation with the news in Virginia. What are you going to say to all of those people making education about that?"

A source familiar told Fox News those comments were made on June 4, after months of debate surrounding racial content in Virginia schools. Youngkin, the GOP nominee for governor, has been outspoken about the issue and attempted to tie it to McAuliffe in May.

Youngkin and others have blasted the Virginia officials for proposing a series of controversial measures that appeared to limit advanced opportunities for students.

"Critical race theory is not a political game or talking point to Virginians," Youngkin spokesperson Macaulay Porter told Fox News. "Terry should tell that to the parents, teachers, and students in Loudoun County, Fairfax, and across the Commonwealth who are up in arms about the lefts’ political agenda being forced into classrooms."

Beyond that, residents have alleged that critical race theory (CRT) is infiltrating various aspects of the educational system, such as its social-emotional learning standards. Various advocates on the left have attempted to deny that CRT influenced material in places like Loudoun County.

Although Loudoun's superintendent has denied teaching CRT, a public records request and one of its school board member's comments indicated that the ideology influenced staff and policymaking.

Once an obscure topic among academics, CRT and its associated ideas have featured prominently in political discussions over the past several months. Among Republicans, the issue has become particularly relevant. Former President Trump banned ideas associated with CRT from being utilized in federal government trainings – something Biden quickly repealed after taking office. In Virginia, the majority of Republican gubernatorial candidates signed onto an anti-CRT pledge just before the GOP nominating convention.

Nailing down a definition of CRT is difficult as one of its progenitors indicated it was a continuously evolving topic.

"CRT is not so much an intellectual unit filled with stuff – theories, themes, practices and the like – but one that is dynamically constituted by a series of contestations and convergences pertaining to the ways that racial power is understood and articulated in the post-civil rights era," said law professor Kimberle Crenshaw.

She went on to say: "I want to suggest that shifting the frame of CRT toward a dynamic rather than static reference would be a productive means by which we can link CRT’s past to the contemporary moment."

Still, critics like Asra Nomani argue that both the curricula and source material behind it contain too much similarities not to be derived from CRT.

In their book, Critical Race Theory: An Introduction, authors Richard Delgado and Jean Stefancic list generally agreed-upon tenets: racism is ordinary and therefore difficult to cure, White people have a material interest in maintaining racism, and "race and races are products of social thought and relations."

Nomani, who helps lead the anti-CRT group Coalition for TJ, responded to McAuliffe's comments in a statement to Fox News Wednesday.

"It's arrogant and out-of-touch with reality. Across Virginia, Mr. McAuliffe needs to understand students are being divided as 'oppressors' and 'oppressed,' shamed for having 'white privilege' and belittled for achieving merit. Asian students are being told they aren't the right kind of minority. … Democrats in Virginia risk losing the votes of many parents if they continue to try to gaslight us. We are educated about the divisive ideology of critical race theory, and we don't want it in our schools. Teachers need to educate, not indoctrinate."

McAuliffe's campaign did not immediately respond to Fox News' request for comment.

During his exchange last week, McAuliffe suggested Republicans were creating a distraction with CRT.

"You know what, people want to know about why are we not paying our teachers?" he said. "Why are we down 1,000 teachers today? Why? And why are 50% of our schools 50 years old? This is what people want to know about. So, let's pay our teachers. Let's get our children access to broadband. Let's make sure we get at-risk children taken care of with pre-K. Those are what the Virginians care about."

CRT and the COVID-19 pandemic have combined in fueling criticism of teachers and administrators, who have generally been accused shirking their responsibilities as educators.

The American Federation of Teachers (AFT), which has contributed $175,000 to McAuliffe since 2013, controversially supported continued lockdowns and promoted the "1619 Project," which has been the target of anti-CRT legislation in recent months. "The 1619 Project, and its extension of educational resources, is one way to address that gap and help students connect their lived experience to the history of the nation," an AFT press release reads.