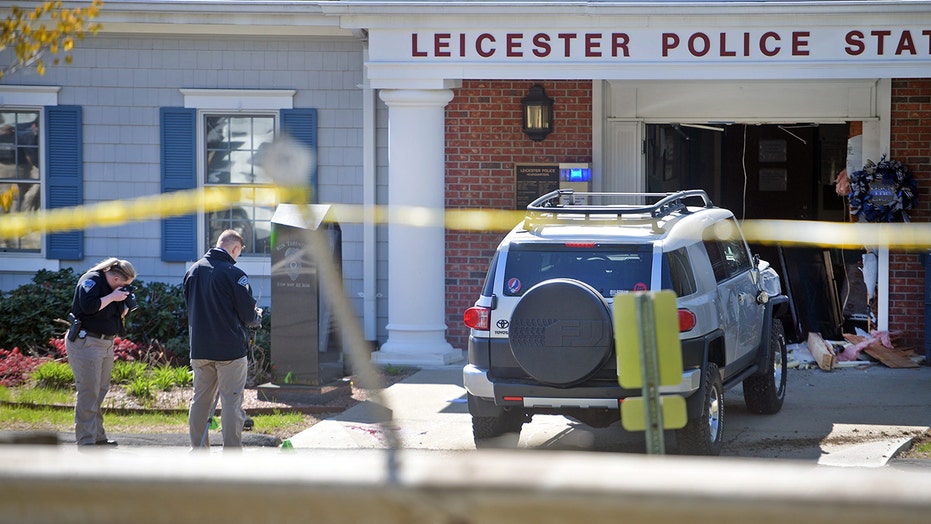 Police in Massachusetts fatally shot a man who repeatedly rammed his SUV into the front doors of a police station and aimed a rifle at officers early Sunday, a county district attorney said.

The suspect, described as a Caucasian male in his early 20s, drove his vehicle into the closed steel double doors of the Leicester Police station just after 6 a.m., Worchester County District Attorney Joseph Early Jr. told reporters at a news conference.

Leicester Police Chief Kenneth Antanavica said the man had driven the vehicle up a handicap ramp leading to the front doors. He said that almost the entire vehicle was inside the station’s lobby when officers arrived.

The man then exited the SUV outside of the station and "shouldered what appeared to be a rifle and aimed it at police officers," Early said. "After that action, police officers then fired and shot the man."

Officers rendered aid to the man until an ambulance arrived. Early said the man was rushed to a hospital, where he was pronounced dead.

While it was unclear whether the man fired any shots, Early said that no police officers were injured.

"We’re very fortunate that no one else was hurt," the district attorney said. "The police have a hard, hard job. You got a guy pops out of a truck, and he’s got a rifle pointing at you. … Their job is so hard."

The suspect, whose identity was not immediately provided, died at the hospital. (Reuters)

Police did not identify the man. Early said the man was known to police "a little bit" and had a pending court date for a traffic violation.

Antanavica said that two officers were put on administrative leave, which is standard policy for the department after this type of situation.

Officials said no further details would immediately be provided as the investigation is still in its early stages. Authorities are currently reviewing video footage of the shooting.

The Massachusetts State Police is handling the investigation.