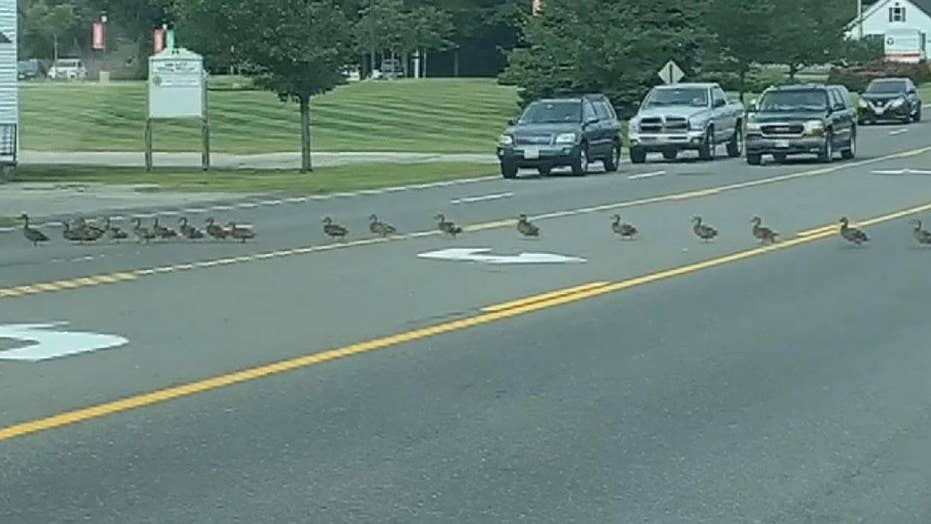 Parade of ducks causes traffic to stop in Maine

Raw video: Reportedly 45 ducks crossed a busy Maine street as drivers patiently waited for all of the ducks to cross safely.

Traffic came to a standstill in one coastal Maine town last week as a parade of ducks — 45 of them — made their way across a highway.

The ducks stopped traffic on Route 111 in Biddeford, a city roughly 20 miles southwest of Portland, during Wednesday morning's rush-hour commute, but drivers didn't seem to care.

Video posted to Facebook by Karen Ramunno shows the ducks quickly parading across the street, stalling four lanes of vehicles moving in both directions.

The ducks seemingly proceed in three groups — with more than a dozen in the first. The second flock of ducks appear to be hesitant to cross the road, but the waiting drivers remain patient, and let the birds pass.

Two more ducks then eventually find their way across the street, quickly waddling as the cars still wait for them to pass.

“Proof that there are more good people in this world than bad!” Ramunno wrote alongside the video. “Not one person in the 2 lines of traffic were beeping or impatient with these guys! Even the last 2 stragglers!”