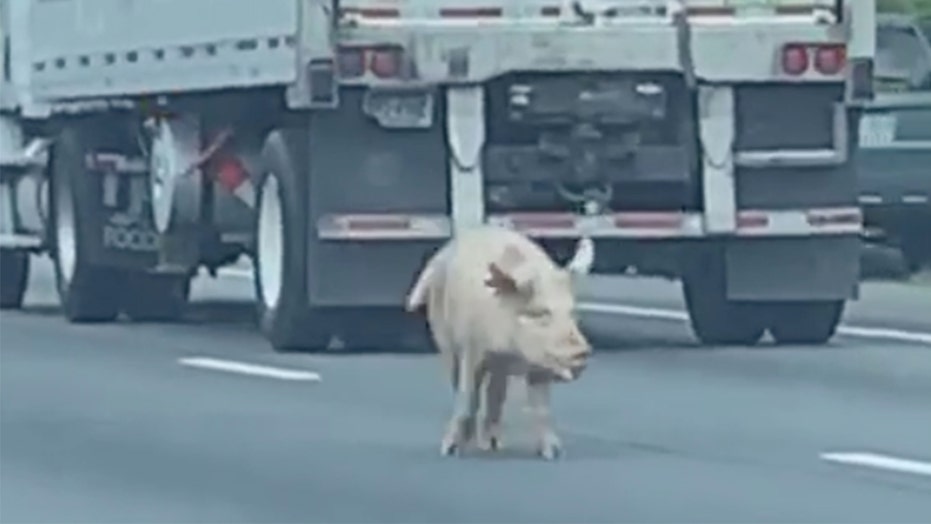 A highway in Virginia was backed up for nearly an hour Wednesday after motorists found themselves sharing the road with loose pigs wandering into traffic, video shows.

The hogs were spotted on the southbound Interstate 95 lanes in Spotsylvania and Carolina counties around 1 p.m., the Richmond Times-Dispatch reported.

Diana Madison, who was driving home when she came upon the scene, told the paper she saw four hogs in total. Some motorists and Animal Control officials were giving them aid. She estimated they weighed around 400 pounds each.

It wasn’t immediately clear how the pigs wound up on the interstate, nor were there any signs of damaged vehicles. At least two of the animals, however, appeared to have injuries.

Bailie Hayden, a driver who posted footage of the ordeal on Facebook, wrote that “All of them were breathing and living but some worse than others. Poor babies.”

State police and deputies with the Spotsylvania Sheriff’s Department took control of the situation, closing the lane shoulder two spots south of where the pigs were roaming around, the Richmond Times-Dispatch reported.

The closure backed up traffic for at least two miles. All lanes were reopened within about half an hour.

The Virginia State Police later said the hogs were being transported in a trailer hitched to a Ford F-250 and that the owner has been charged with failing to secure the animals, the Free Lance-Star reported. An investigation is ongoing.