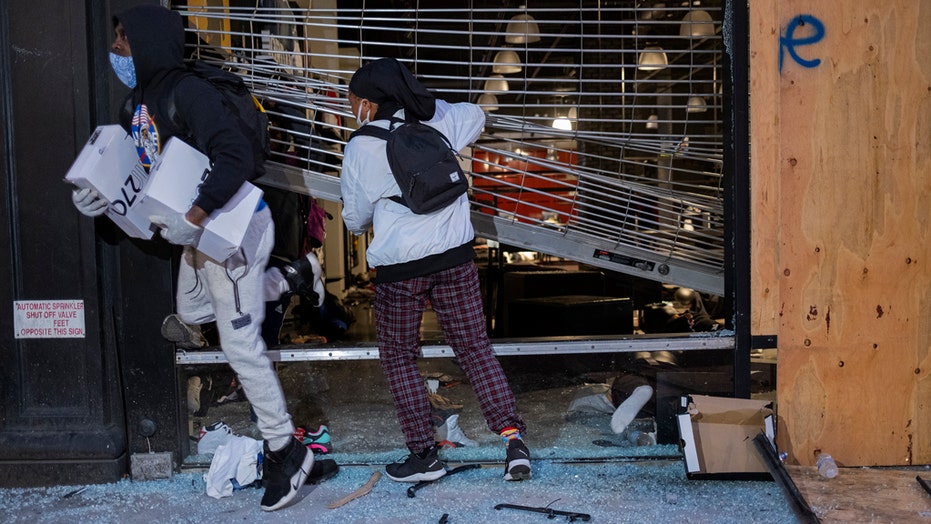 Curfew-defying looters with free rein beat a cop to the ground in a disturbing scene caught on video, set fires on streets and ransacked stores in the Bronx late Monday into early Tuesday.

“Fordham is on fire,” Uptown Collective tweeted, showing a half dozen fires burning along a trash-strewn Fordham Road in the West Bronx.

“This is an ominous sign familia,” the tweet said, the Post reported. “This is not good for communities of color. Protest is called for but destroying our own community is not. Stay safe.”

The cop being beaten was caught on cellphone video and posted on Twitter by an NYPD police union.

It shows the uniformed officer on the ground as a man attacks him. A second man then runs up and throws an object at the officer. That person runs away as a third man picks up the object and hurls it at the officer. The person who shot the video is heard cursing the police.

The video shows the dazed officer getting to his feet with his gun drawn, holding it down at his side.

"NYPD Cop attacked in the Bronx," the Sergeants Benevolent Association tweeted. "I guess the critics will now say he overreacted. NYPD Cops defend yourselves, you are alone!"

Other video shows dozens of looters racing from a jewelry store as cops pull up close to the fires, according to the Post.

People exit damaged stores after the glass was knocked out in the Chelsea neighborhood of New York, June 1. (AP Photo/Craig Ruttle)

NYPD OFFICER STRUCK BY VEHICLE IN THE BRONX IN APPARENT HIT-AND-RUN, VIDEO SHOWS

“How are we destroying our own communities and are ok with it?” Jose Daniel Rojas asked in a tweet with video of the destruction, according to the paper. “There are serious problems we need to address.”

The mayor tweeted early Tuesday that he had “just left the Bronx.”

He slammed his fist down as he said, "It does not represent the people of this city. Anyone who attacks a police officer attacks all of us. I want to be abundantly clear about that.”

The looting happened amid protests over the death of George Floyd, who died in police custody May 25 after Minneapolis officer Derek Chauvin pinned him down and kneeled on his neck for more than 8 minutes -- an incident caught on cellphone video.

Chauvin has since been charged in Floyd's death. Three other officers at the scene have not been charged but were fired.

Cabrera called on Gov. Andrew Cuomo to activate the National Guard, as in other states, WNBC-TV reported Tuesday.

“Fordham Road is the lifeblood of the West Bronx, providing jobs as well as essential goods and services,” Cabrera said, according to the station. “We are already suffering physically, socially and emotionally from the COVID-19 pandemic. We can’t afford to lose our economic engine."

Cuomo has placed the National Guard on standby but believes the NYPD has the manpower to handle the protests, according to the station.