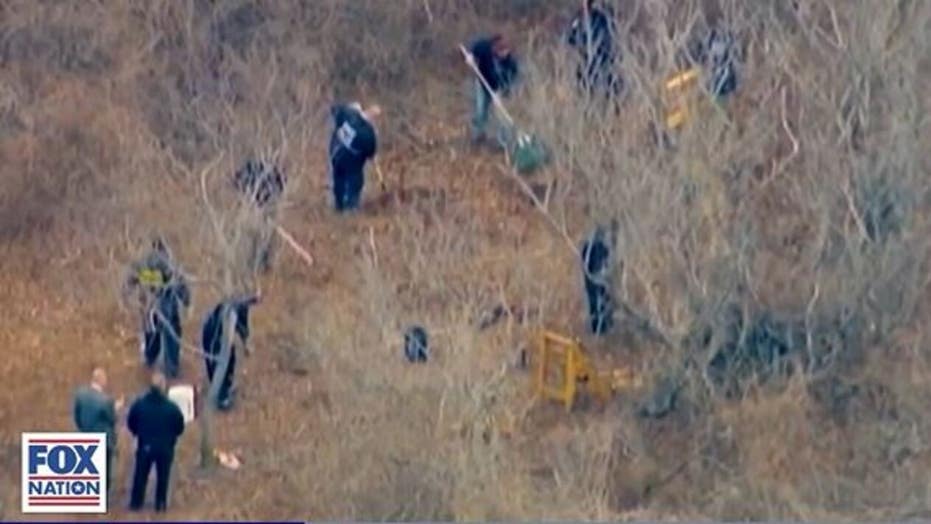 'Grim Tide' looks at the years-long search for the Gilgo Beach killer.

On a chilly afternoon in December 2010, an officer and his dog discovered the first of ten sets of human remains on New York’s Long Island, setting off the hunt for an elusive serial killer or killers whose atrocities shook a quiet beachfront community to its core.

More than a decade later, with no arrests made in the case, investigators are relying on new, cutting-edge technology to solve a mystery that has stumped even the most experienced detectives.

They may be close.

Shannan Gilbert, a 24-year-old escort from Jersey City, N.J., disappeared from Oak Beach, N.Y., in May 2010. The police search to find her led to the discovery of ten sets of humans remains and set off the hunt for a serial killer or killers.

"We are looking for someone who is sophisticated, particularly someone who knows how to evade detection," he added.

Nine of the ten victims whose remains were found along Ocean Parkway in Suffolk County are believed to have been sex workers. Four of the victims advertised as escorts on Craigslist. Police said the killer used burner phones to contact these women. The suspect also used a cell phone belonging to one of the victims to make taunting phone calls to a family member – short calls that pinged from busy cell towers near Times Square and Penn Station, according to investigators.

Sini, a former federal prosecutor with a background in cold case investigations, has invested more than $300,000 in advanced technology to analyze old phone data in the case.

"Cell phone work is critical to solving this case," he said. "There is an incredible amount of data – we’re talking over five million data points. The human brain cannot analyze that data in any constructive way."

"We're trying to collect dots but then the key is to connect the dots, so we realized we had to invest in hardware and software to appropriately analyze that data," said Sini, who has assigned 23 people in his office to work on the investigation since taking office in early 2018.

Sini noted that while the killer used a burner or "throwaway phone" to contact victims, the killer likely also carried a regular, traceable cell phone.

"Imagine the ability to track where the killer was by utilizing the bad guy phone and figure out exactly where that bad guy phone was and then compare it to the different victims and see if there is a number that pops that's common to those different times in different areas," he said.

While Sini would not say whether authorities have a suspect in the serial murders, he confirmed to Fox News that investigators have identified certain phone numbers of interest in their investigation.

"The more we put into the software and the more we study the results, we are getting a clearer picture of what happened during the time these women were murdered," he said.

In the pre-dawn hours of May 1, 2010, 24-year-old Shannan Gilbert, an escort from Jersey City, N.J., disappeared from Oak Beach, a secluded, gated community on the South Shore of Long Island. The police search to find Gilbert led to the discovery of ten sets of human remains in thick brush off Ocean Parkway, which traverses a narrow strip of barrier beaches.

Maureen Brainard-Barnes, 25, disappeared in July 2007. Her remains were found in 2010 at Gilgo Beach.

In December 2010, the skeletal remains of Melissa Barthelemy, 24; Maureen Brainard-Barnes, 25; Megan Waterman, 22, and Amber Lynn Costello, 27, were found wrapped in burlap and placed 500 feet apart from each other in the bramble at Gilgo Beach. The four young women, who disappeared at different times, had advertised as escorts on Craigslist.

A more extensive search of the area – with the assistance of the FBI – yielded more human remains: the skull, hands and forearm of 20-year-old Jessica Taylor, whose torso was found in Manorville, N.Y. in 2003; the skull, hands and foot of 24-year-old Valerie Mack, who was identified through genetic genealogy and whose torso was also found in Manorville in 2000, and the skeletal remains of an unidentified Asian male dressed in women’s clothing. Those findings were quickly followed by more grisly discoveries: an unidentified female toddler, bones of a woman believed to be her mother and a skull linked to a torso found in 1996 on Fire Island.

Valerie Mack, left, is seen in an undated photo with her sister, Amanda. For years, Mack was known as "Jane Doe No. 6." Her naked torso was found in Manorville, N.Y., in 2000 and the rest of her dismembered remains were found in 2011 along Ocean Parkway in Long Island. In 2020, authorities announced that they had positively identified the remains as Mack through the use of genetic genealogy.

"I vividly remember the discovery of those sets of remains," said Stuart Cameron, the acting Suffolk County Police commissioner who oversaw the ground searches as the commanding officer in 2010.

"It was very troubling to the police officers involved in the search that they had found a toddler," he said.

Authorities eventually found the skeletal remains of Gilbert in a marsh near Oak Beach in December 2011. The Suffolk County Medical Examiner ruled her cause of death as undetermined, a finding that has been called into question by the Gilbert family attorney, John Ray.

One question befuddled investigators from the beginning: Were they hunting for one serial killer or more than one killer? Theories diverge on the answer. A source close to the investigation told Fox News the murders are likely the work of one killer whose behavior and methods evolved over time.

Others, like Cameron, do not believe the evidence is definitive enough to draw a conclusion.

"I can see the validity of both theories," he said. "But when you're engaged in an investigation, especially a serial killer investigation, you have to keep an open mind. To lock in one theory would be, I think, misguided."

In addition to new phone technology, Sini has also employed the help of an M-VAC system to collect DNA from porous or rough objects as well as to retest physical evidence that has been preserved for a decade.

On a September afternoon in the Suffolk County crime lab, Clyde Wells, a forensic scientist working on the case, offered a rare look at the technology to demonstrate how the system works by suctioning particles from a rope and then releasing them into a testing solution.

"It's satisfying because we know we're close," Wells said of the technology. "We think it's only a matter of time."