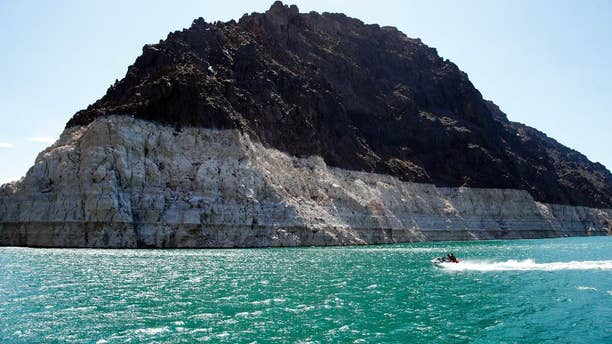 FILE - In this July 17, 2014 file photo, recreational boaters ride by a bathtub ring that delineates the high water mark at Lake Mead in the Lake Mead National Recreation Area in Nevada. Water managers in Las Vegas and the Los Angeles area have reached a deal to draw enough water to serve some 300,000 homes from the Lake Mead reservoir on the Colorado River and sell it to California. (AP Photo/John Locher,File) (The Associated Press)

Water managers in Los Angeles and Las Vegas are poised to adopt a drought-driven deal to buy enough water to serve about 300,000 homes annually and send it from the Lake Mead reservoir to Southern California.

The Southern Nevada Water Authority board is due on Thursday to consider a water agreement that would have the Metropolitan Water District of Southern California pay $45 million for 150,000 acre-feet of water.

The Metropolitan district board is set to consider approving the deal Monday and Tuesday.

"We'll be trading dollars for water, and then back again," said Jeffrey Kightlinger, general manager of Metropolitan, which serves about 19 million Southern California customers.

"As a practical matter, we'll use the water during drought and return it, bucket for bucket, when they need it," he said Wednesday. "It all balances over time."

On Wednesday, the lake level was 1,078 feet above sea level, just 3 feet above a 1,075-foot trigger point that would require a percentage cut in water supplies to Arizona and Nevada.

But Entsminger said the lake level should recover in plenty of time for crucial January 2016 and January 2017 point-in-time measurements for such a drought declaration. He called the deal with Southern California "elevation-neutral for Lake Mead."

Still, if the lake level drops below 1,045 feet, California is obligated to return 75,000 acre-feet to the lake.

Las Vegas currently gets about 90 percent of its drinking water from the vast Colorado River reservoir behind Hoover Dam.

Entsminger and Kightlinger noted the lake loses about 3 percent of is volume annually to evaporation in the arid desert heat.

Las Vegas has water to spare because of conservation and reuse programs that over the last decade have cut water use from 325,000 acre-feet in 2002 to 220,000 acre-feet today, according to the Southern Nevada Water Authority. An acre-foot is about enough to serve two homes for a year.

At the same time, the Las Vegas-area population has grown an estimated 25 percent, to about 2 million people. The region also hosts more than 40 million tourists a year.

Entsminger said a decade of aggressive efforts to identify supplies and bank resources have built Las Vegas a seven-year supply cushion with about 1.5 million acre-feet of water banked in Nevada, California and Arizona. Some of that water is injected into underground aquifers, where it can be pumped out. Some is stored in above-ground reservoirs that are prone to evaporation.

The Southern Nevada Water Authority currently banks 205,000 acre-feet of water with Metropolitan. The new agreement would add another 150,000 acre-feet.

The water officials said the evaporation rate became a crucial calculus for the deal between two agencies.

"They can either bank water in Lake Mead and watch it evaporate before they need it, or they can bank it with us," Metropolitan's Kightlinger said.

Entsminger, in Las Vegas, acknowledged the narrow margin and complexity of the agreement. He used the analogy of a savings bank.

"If a bank charged you 3 percent and told you couldn't get your money out, you'd switch to a bank that gave you the 3 percent and still let you recover the money when you need it," he said.