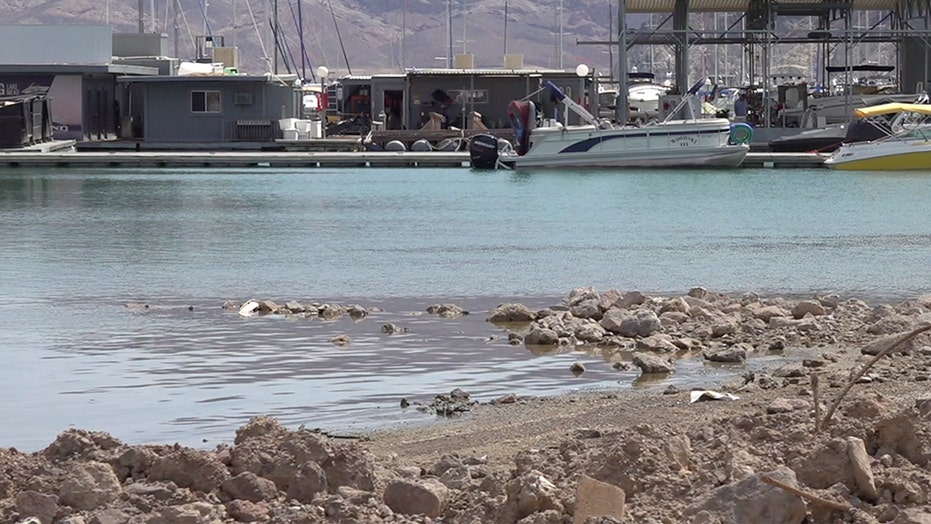 Part of the Colorado River, Lake Mead and the Hoover Dam supply millions of people with water and electricity. Low water levels are affecting locals, businesses and tourists.

BOULDER CITY, Nev. – Lake Mead, one of the National Park Service’s most visited vacation spots, rests in the shadow of the Hoover Dam.

But there’s a problem: The lake is getting real low.

People who live in the area are not the only ones affected; businesses and tourists are as well.

Krystal Stockwell and her family have owned Las Vegas Boat Harbor and Lake Mead Marina since 1957.

The lowering lake level has been causing headaches.

"Both our marinas float, so our maintenance guys are busy keeping up with the lowering waters," Stockwell said. "We have to move the anchors out so that we can move the marinas out so we’re not stuck in the mud."

"We’d like to see it entirely full. The last time the reservoir was entirely full was in the late 1990s, around 1998," said Doug Hendrix, the public affairs specialist for the Lower Colorado Basin for the U.S. Bureau of Reclamation.

The Hoover Dam is one of the National Park Service's most popular tourist attractions. The federal government is expected to declare a water shortage. (Ashley Soriano/Fox News)

Boaters and families at the lake are already feeling the impact, as the National Park Service has closed some boat launch ramps.

"This is a different landscape every time they come out now because the lake has not been this low ever in their lifetime," said Chelsea Kennedy, the acting public affairs officer for Lake Mead National Area, which is part of the National Park Service.

The U.S. Bureau of Reclamation, which oversees water management, is thinking about plans to conserve and store water.

"The Colorado River is the lifeblood for about 40 million people in the southwest including northern Mexico," Hendrix said. "Under full reservoir operations, we can generate enough power annually for about 600,000 households. Now we’re down to be able to generate power for about 450,000 households."

The federal government will likely declare a water shortage around mid-August.

That means less water available to parts of Arizona, Nevada, California and even northern Mexico.

As for Las Vegas Boat Harbor, the owner says business is good because people are eager to get back to their annual summer trips.

Meanwhile, the National Park Service says they are seeing a higher number of visitors despite the low water levels – more than 8 million people last year.