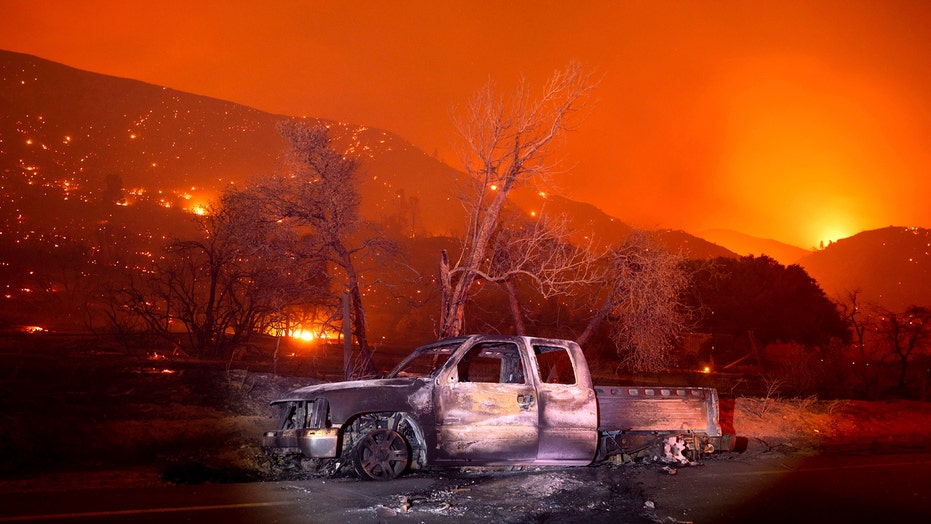 Over 10,000 acres have been burned in hours as high heat and strong winds challenge firefighters.

A fast-moving wildfire in the foothills north of Los Angeles has burned at least 10,000 acres in a matter of hours, according to officials.

The Los Angeles County Fire Department said the blaze, dubbed the "Lake Fire," remains at 0% containment as it burns in the mountainside community of Lake Hughes, located about 65 miles north of Los Angeles.

The blaze broke out around 3:30 p.m. Wednesday but grew quickly in size as firefighters reported "extreme fire behavior" and "rapid spread" to the northeast. Almost seven hours after starting, the blaze reached 10,000 acres.

The fire was feeding on chaparral and other brush, some of which hadn't burned since 1968, but the flames were moving into heavier forest on top of ridges, county Fire Chief Eric Garcia said.

A  "firewhirl" or "firenado" was also captured by FOX11's Bill Melugin whirling into the air as the blaze grew.

Fire tornados, also known as fire vortices, are not tornadoes in the true sense. They occur when a gust of extremely hot air blows through the fire at a certain angle, producing a spinning momentum which then sucks up embers and debris.

In 2018, the massive Carr Fire in California produced a vortex with winds clocked at 143 mph by the National Weather Service (NWS), a wind speed equivalent to an EF-3 tornado on the Fujita scale.

According to the NWS, a pyrocumulus cloud forms if there is enough moisture and atmospheric instability over the "intense heat source."

The explosive storms can form during a fire when heat and moisture from the plants are released, even when the fuel is relatively dry. Similar conditions were seen during devastating wildfires earlier this year in Australia and another blaze in Northern California.

Los Angeles County Deputy Fire Chief David Richardson said at a nighttime news conference that there were reports that some outbuildings had burned as the blaze raged. The cause remains under investigation.

Photographs from an Associated Press photographer showed what appeared to be a burning home as well as a burned vehicle.

Aerial footage from FOX11 also showed structures that appeared to be homes burning in the area.

Preliminary damage assessments found that at least three structures burned. It wasn't immediately clear if they were houses.

As of Thursday morning, officials said more than 1,059 firefighters are battling the blaze and helicopters are conducting drops in the area. Some 5,420 structures are threatened by the blaze.

Fire crews and some aircraft battled the blaze overnight, but crews expect more "extreme and aggressive" fire behavior to continue on Thursday.

A chimney stands among the smoldering remains of a residence as the Lake Fire burns in the Angeles National Forest, Calif., north of Santa Clarita on Thursday, Aug. 13, 2020. (AP Photo/Noah Berger)

The Lake Fire is expected to continue to grow and threaten the surrounding communities of Lake Hughes, Leona Valley, Lake Elizabeth, Pine Canyon and Three Points.

Mandatory evacuations have been issued for at least 100 homes in the area, according to officials.

Shelter areas were set up but, because of concerns due to the coronavirus pandemic, people were being told to shelter in their cars.

After erupting Wednesday afternoon, the blaze sent a massive column of smoke thousands of feet in the air.

It could be seen dozens of miles away in Los Angeles and other Southern California communities.

The area was expected to see temperatures in the mid-90s or higher through the weekend, with low humidity, but winds remained light.

Fox News' Michael Ruiz and the Associated Press contributed to this report.