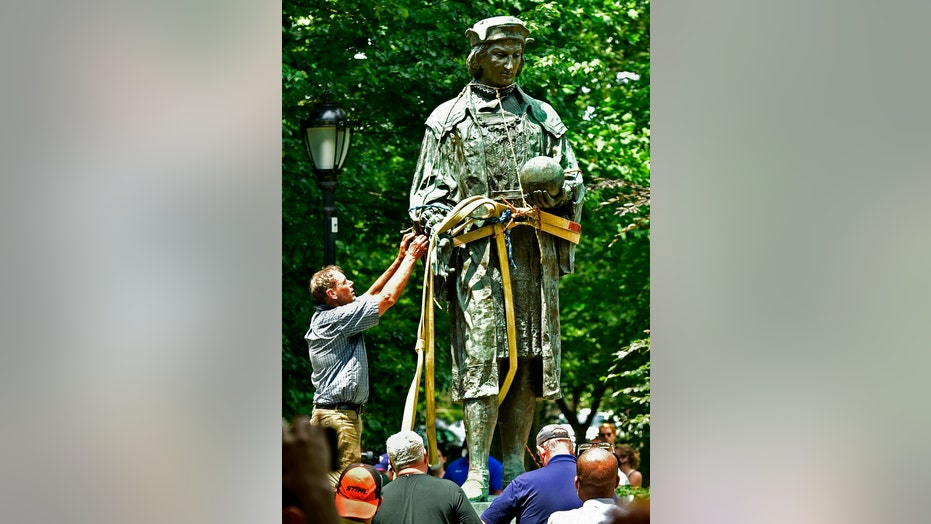 A Christopher Columbus statue that stood for nearly 130 years in New Haven, Conn., was taken down by the city this week -- and now its next resting place appears uncertain, according to a report.

A release by the city said officials were "planning for it to reside in the Knights of Columbus Museum." However, a spokesman for the Roman Catholic fraternal organization said he wasn't directly informed of such a plan.

“I’m not aware of any … talks with the city to take the statue to the Knights of Columbus Museum,” Joseph Cullen told the New Haven Register. “They have not engaged us.”

Cullen said that getting the Columbus statue to fit into the museum might be a problem, as a large portion of the institution is being converted into a pilgrimage center to honor its founder, Michael McGivney.

He told the paper what happens next should be determined by a community dialogue.

“We think there should be a community dialogue among all concerned citizens about what happens to the statue and whether anything will replace it,” Cullen said, according to the report.

Statues of many historical figures have come under increased scrutiny in recent weeks following the death of George Floyd in police custody on May 25 in Minneapolis.

Those who call for statues of Columbus to be removed believe he spurred centuries of genocide against indigenous populations in the Americas and is a symbol for bigotry and colonialism.

The New Haven statue was reportedly taken down hours after several skirmishes broke out from people defending the historical landmark and others who wanted it removed, the Register reported.

About 40 to 50 people came out to defend the statue prior to its removal, with upwards of 150 people on both sides showing up a few hours later, police estimated.

“There were some comments that were made that were racist, there were some fights and an individual that was protesting the taking down of the statue hit another man, he hit a counter-protester in the back of the head. It’s obviously very concerning and disappointing,” New Haven Mayor Justin Elicker said, according to the paper.

Supporters of its removal were heard yelling, "Tear it down!," with some holding signs in relation to the Black Lives Matter movement.

“A change is gonna come,” a woman with a megaphone reportedly sang, according to the Register.

Those who wanted to keep the statue described it as an important part of the Italian-American heritage and history.

“This is absolutely absurd that they would allow this to happen," one resident told the paper. "What’s next, George Washington and Abraham Lincoln?”

City spokesman Gage Frank said formal conversations have yet to be conducted with the Knights of Columbus, although he called the museum "a potential place where the statue can reside from leaders in the Italian-American community.”

“Right now, the Christopher Columbus statue is in city custody,” Frank said. “We will update the public when a plan is in place as to the future of the statue.”