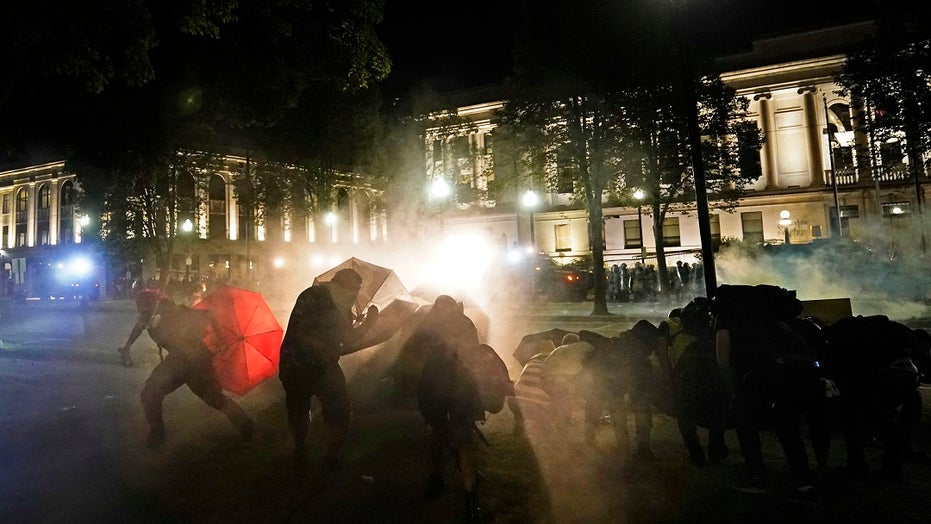 At least three people were shot, including two fatally, after gunfire rang out in Kenosha, Wis., overnight as protests against the police-involved shooting of Jacob Blake on Sunday turned violent for a third-straight night Tuesday.

Police said they responded to reports of shots fired on 63rd Street and Sheridan Road and discovered multiple victims. Besides the two deaths, a third gunshot victim was transported to the hospital with serious, but non-life-threatening injuries, according to authorities.

WARNING: VIDEO BELOW IS GRAPHIC

Police were looking for a man armed with a long gun, although its unclear how many shooters there were, the Milwaukee Journal Sentinel reported. Kenosha County Sheriff David Beth said one person was shot in the head and another was struck in the chest. He believed at least one person would be taken into custody based on video evidence they reviewed.

Social media posts compared the scene to a warzone. Protesters could be seen smashing car windows and clashing in the streets. Multiple videos were interrupted with the sound of gunshots.

The Daily Caller tweeted a video of a shooting and said one of its reporters was at the scene and helped carry the gunshot victim to a hospital that was across the street. The website said its reporter, Richie McGinnis, was unharmed. The shooting victim appeared to have been shot in the head, according to the video retweeted by the website.

A person could be heard in the video saying, "I just killed somebody."

Another victim from one of the shootings appeared to be suffering from a serious arm wound. Social media posts from the city depicted armed individuals guarding businesses.

The shooting is active and ongoing, police said. The names of the victims have yet to be determined.

Early on Tuesday, anger spilled onto the streets as protesters tried breaking down a fence outside a county courthouse and others reportedly threw objects at authorities, according to media reports.

The National Guard repeatedly told the crowd to disperse. Most remained despite an 8 p.m. curfew imposed for the second night in a row. Tear gas was also used when an armored police vehicle drove through a crowd outside the courthouse and pepper balls were shot from the roof, Kenosha News reported.

Other protesters flipped off law enforcement and some burned an American flag in front of the courthouse fence, according to the newspaper. Some threw water bottles and fireworks at police behind the barrier.

BEN SHAPIRO SLAMS NY TIMES COVERAGE OF WISCONSIN RIOTS: 'FIRES DON'T BREAK OUT ON THEIR OWN'

Clashes between protesters and authorities continued throughout the night, as police used armored trucks to push demonstrators away, who responded by throwing fireworks. A rolling dumpster was also used to block the path of one of the vehicles.

Others appeared to push a lit dumpster down a street towards authorities located near a gas station.

Protesters would later confront armed citizens who were attempting to prevent looting and destruction to local businesses.

The unrest came days after Blake was shot and wounded by a Kenosha police officer. Cellphone video of Blake being shot multiple times in the back has elicited outrage and made the city the latest flashpoint in a summer filled with ongoing demonstrations against police brutality that have turned violent.

“They shot my son seven times, seven times, like he didn’t matter,” said Jacob Blake Sr., who spoke to reporters alongside other family members and lawyers Tuesday afternoon outside the courthouse. “But my son matters. He’s a human being and he matters.”

In anticipation of the kind of unrest that occurred Monday night, Kenosha County Sheriff David Beth said Tuesday his office was working with other agencies to minimize destructive behavior.

"People are frustrated, I get it. And they’re scared. I certainly get that, too," Beth said in a statement. "Rumors abound on social media and elsewhere, with widely varying levels of truth to them. We know that much of the damage is being inflicted by people coming in from outside our community, with the intent to rob and destroy, not to engage in their First Amendment right to demonstrate."

Wisconsin Gov. Tony Evers announced Tuesday an increase in the National Guard presence from 150 guardsmen Monday to 250 on Tuesday.

Also Tuesday, lawyers for Blake's family said the 29-year-old was paralyzed from his waist down as a result of the shooting. The city has not said much about the encounter and the officers involved have been placed on administrative leave.

The family plans to file a civil lawsuit against the Kenosha Police Department, lawyers said.

Hundreds of protesters defied Monday's curfew as they gathered downtown. Some clashed with police and other vandalized nearby businesses and residences.

"As I was riding through here, this city, I noticed a lot of damage and it doesn't reflect my son," Jackson said. "So I'm really asking, and encouraging everyone in Wisconsin and abroad to take a moment and examine your heart. As I pray for my son's healing ... I also have been praying even before this for the healing of our country."